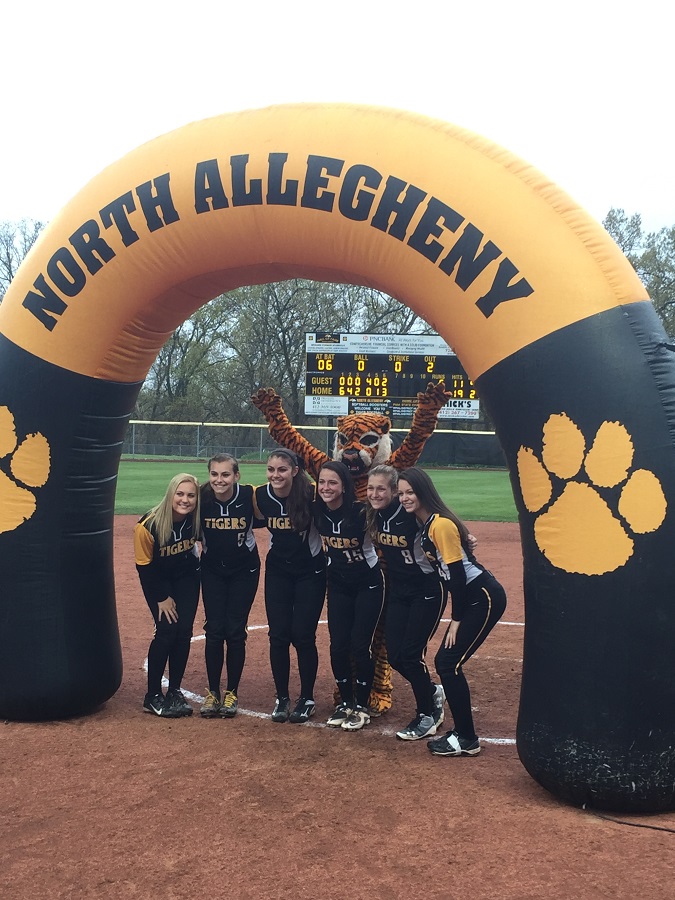 On a damp but festive night at the NASH Softball Field, the North Allegheny Varsity Softball Team raised its season record to 16-1 with a 9-0 victory over the visiting Montour Spartans. All six North Allegheny seniors played throughout the game after having been recognized prior to the contest. The North Allegheny seniors are: Madi Beining, Mollie Benvenuto, Allie Green, Lacey Hilderbrand, Laura Ryder, and Liz Scherer. Adding to the evening’s atmosphere was the introduction of the players and coaches of both the Gold and White Junior High Teams between innings.

Special thanks go to the North Allegheny Softball Boosters for planning the event, as well as to Superintendent Dr. Robert Scherrer and NASH Principal Mr. John Kreider for their attendance and support, and to “Tiger Sami” for a special guest appearance. The game was attended by many former Tiger players dating through the years back to the 2006 W.P.I.A.L. Championship season.

In the game, North Allegheny built its lead inning-by-inning, scoring one in the first, three in the second, two in the third, one in the fifth, and two in the sixth. Extra-base hits included doubles by sophomore left fielder Anna Pilotta, senior catcher Liz Scherer, senior third baseman Allie Green, and senior designated player Laura Ryder, who doubled twice.  North Allegheny also played errorless softball defensively on their way to the win, highlighted by ten assists and one putout by Beining.

Next up for the Tigers is a trip to Hempfield to take on another group of Spartans on Monday afternoon at 4:00 PM in another non-section affair.