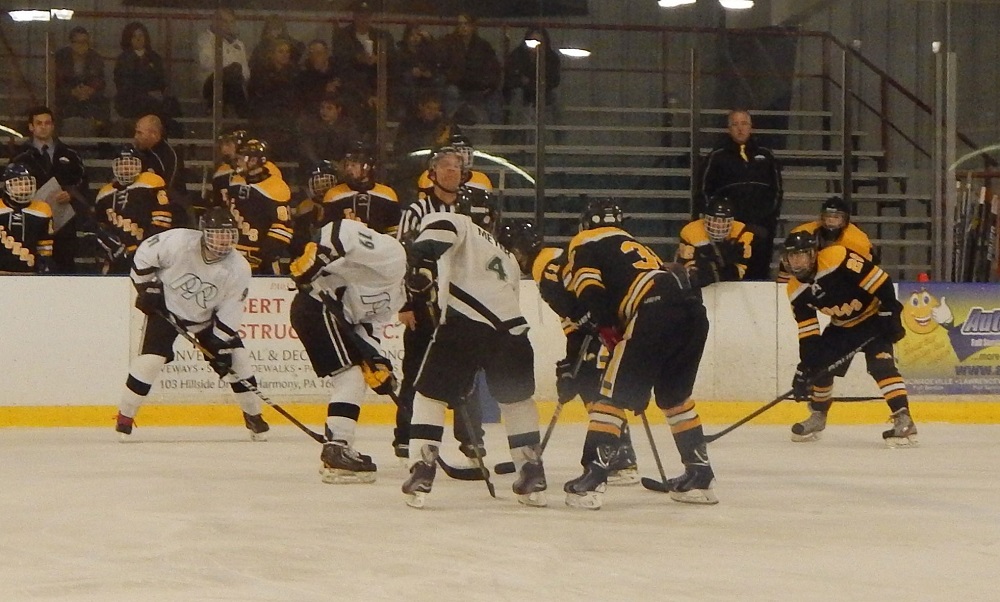 North Allegheny scored four second period goals as the Tigers smothered the Pine-Richland Rams on Monday night, 5-2.  After a scoreless opening stanza, sophomore Joseph Zappia gave the Tigers a 1-0 lead with a goal just 12 seconds into the second period and NA was off and running.  A tripping penalty to Pine-Richland’s Kyle Cunningham gave the Tigers a power play midway through the period and Erik Chidester converted on the man-advantage to bring the score to 2-0, North Allegheny. At the 10:30 mark of the period, Marty Hubert shoveled the puck into the Rams net for a 3-0 pad. For a moment, Pine-Richland stole away some of the momentum with a goal by Ben Meyer, but NA closed out the period with a marker by Dominick Zangaro for a 4-1 lead at intermission.

Zangaro struck again early in the third period to put the game away for the Tigers. Meyer netted a power play goal for the Rams in the waning seconds of the game with the outcome already decided, 5-2, Tigers. In net, Joseph Hubert got the start for North Allegheny and stopped 24 of 26 shots.  Rams goalie Isaac Stephens made 18 saves on the night.

With the win, North Allegheny improves to 2-1 on the young season while Pine-Richland falls to 2-1.  The Tigers won’t have much time to rest as they’ll host the Butler Golden Tornado tonight at the BladeRunners in Warrendale.  The opening faceoff is scheduled for 8:10 pm.