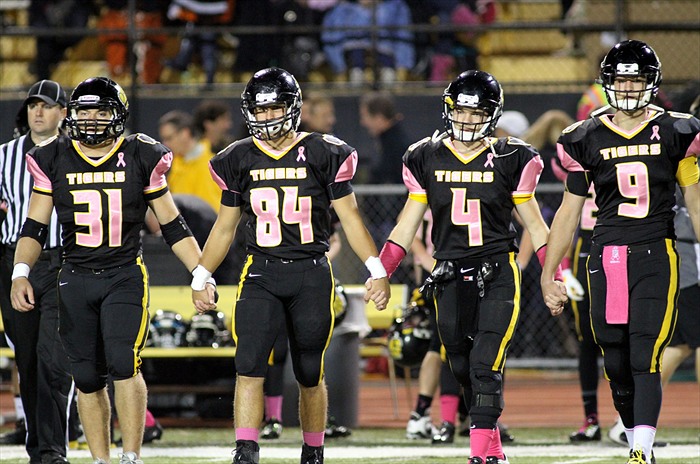 Byerly was North Allegheny’s leading receiver with 27 catches for 405 yards and three touchdowns.  A menace to opposing offenses and a constant source of pressure up front, Blendinger collected 42 tackles, nine going for losses, and finished second on the team with 5.5 sacks. Earning his second straight First-Team All-Conference selection, Skundrich was the Tigers leader in tackles with 85 and also led the team with 8.5 sacks.

Named to the All-Northern Eight Second-Team were tackle Cole McKenry, guard Brian Mitchell, quarterback Jeff Clemens (also a senior captain), running back Josh Bergman, defensive lineman Eric Sprys, defensive back Riley Trueman and kicker Seth Mancuso.  Clemens was the starting quarterback for NA, racking up 1,212 yards through the air and 477 more on the ground, accounting for a total of 18 touchdowns. Bergman collected 534 yards rushing and seven rushing scores, and Mancuso connected on six field goals and totaled 51 points from the kicker position.

Clemens, Bergman and Mancuso were provided the space necessary to perform courtesy of an offensive line that was anchored by McKenry and Mitchell.  On defense, Sprys tallied 48 tackles, 14 for a loss, and 5.5 sacks.  The top thief in the defensive backfield, Trueman was the team leader in interceptions with five and added 39 tackles from his safety position.

For a complete look at the All-Conference Teams from all three Class AAAA conferences, click here.