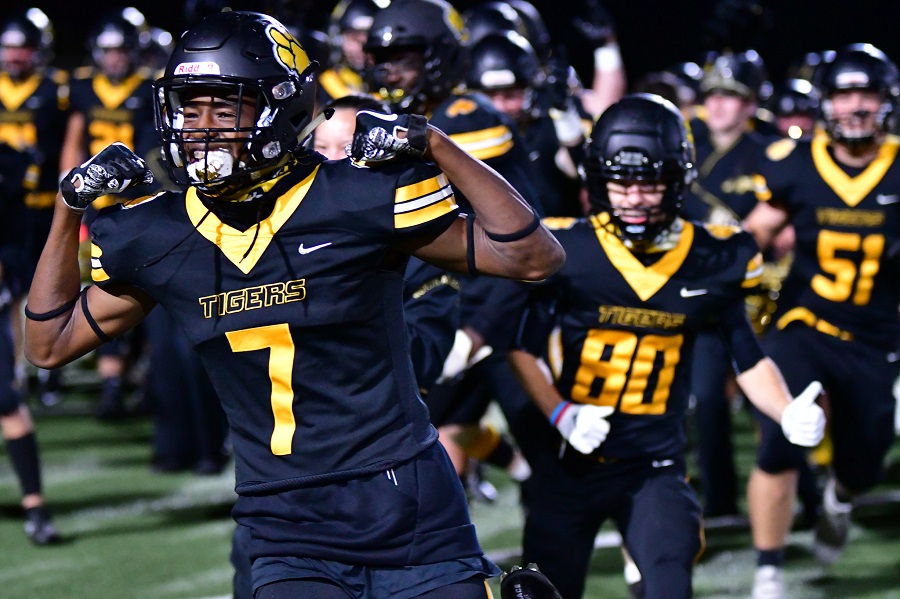 For the third time in the last five seasons, the North Allegheny Tigers (5-0) will meet the Seneca Valley Raiders (4-2) in the WPIAL semifinals. Tonight’s matchup will also mark the fourth time in the last decade that these teams have met in the WPIAL playoffs with the head-to-head playoff series split at 2-2.

Top-seeded North Allegheny is making its 17th consecutive playoff appearance and fifth straight trip to the WPIAL semifinals. The Tigers are hoping to reach the WPIAL title game for the first time since 2012.

Seneca Valley is making its eighth playoff appearance in the last 10 seasons. SV has reached the WPIAL finals in two of the last four seasons, beating North Allegheny in the semifinal round both times to get there.

The Raiders enter the postseason as the No. 4 seed following a 28-27 overtime loss to Mt. Lebanon last week that cost Seneca Valley the opportunity for a home playoff game. In that game, starting quarterback Brian Olan threw three interceptions, something he’ll need to avoid against an opportunistic North Allegheny defense.

Another injury issue for the Raiders has been at running back where senior tailback Ethan West has been absent the last few weeks. Junior tailback Nolan Dworek has performed admirably as the team’s leading rusher with 444 yards and six touchdowns, to go along with 8 catches for 100 yards and one receiving touchdown. While West has played in only two full games before exiting in a loss to Central Catholic in week three, he could make his return to the starting lineup tonight against the Tigers. West is a Division I recruit with offers from Duquesne, Army, Holy Cross, Fordham and others.

Along with Dworek, another player who has seen time rushing the football is senior wideout Connor Lyczek. The versatile Lyczek leads Seneca Valley in receiving with 16 catches for 249 yards and a touchdown. He will also run out of the Wildcat formation, as he did for nine carries and 30 yards last week against Mt. Lebanon. The Seneca Valley offensive line is anchored by senior Jimmy Royal, who is receiving some small Division I college attention, and Don Kreisberg, who is verbally committed to Division III powerhouse, Mount Union.

Royal is also a standout defensive lineman for a Seneca Valley defense that is second in Class 6A in points allowed behind North Allegheny, giving up an average of 16 points per game. Joining Royal on the defensive front is senior Josh Miller, the team leader in sacks with nine on the campaign. Junior linebacker Tyler Yurich is the team leader in tackles with 38 stops on the season. Lyczek tops the squad in interceptions with three.

While the Seneca Valley defense has been good, the North Allegheny defense has been the best in Class 6A, giving up a paltry 10 points per game. The Tigers rush defense has been particularly stout, allowing only 41 rushing yards per contest. Senior linebacker Brady Leczo is the team leader in sacks with 4.5, followed closely behind by athletic defensive lineman Jacob Porter’s four sacks. Along with Leczo, the Tigers boast all-conference linebackers J.P. Cantu, Nate Hoke and Khalil Dinkins. Hoke is a BYU commit and Dinkins recently announced his commitment to Penn State University. NA’s leading tackler is defensive back Mason Kress with 17 stops.

The North Allegheny offense is averaging 32 points per game and wears down opponents with a physical ground game. Utilizing a bevy of different ball carriers, NA’s leading rusher is junior J.R. Burton with 229 yards and four touchdowns. Dinkins, who often runs out of the “Monster Package,” has toted the football for 137 yards and three scores. Dinkins is also the team’s leading receiver, with 16 catches for 234 yards and three receiving touchdowns. Kress is another versatile wideout with 149 yards and two touchdowns receiving, to go along with 98 yards and two more scores on the ground. Far from a one-trick pony, the North Allegheny offense is led through the air by senior quarterback Greg Phillips, who recently torched Canon-McMillan in a 35-0 win for 240 yards and four touchdowns on 17 of 23 passing. The offensive line is composed of Josh Ruppert, Nick Frisco, Ben Withrow, Mike Dorn, Bene Caputo and tight end Sean Metcalf.

Kickoff for tonight’s Class 6A WPIAL Semifinal is slated for 7:00 p.m. at Newman Stadium. The game will be broadcast live via the internet on the North Allegheny Sports Network, with the pregame show getting underway at 6:40 p.m. The pregame show includes an interview with Tigers head coach Art Walker. To listen to tonight’s game, click here.