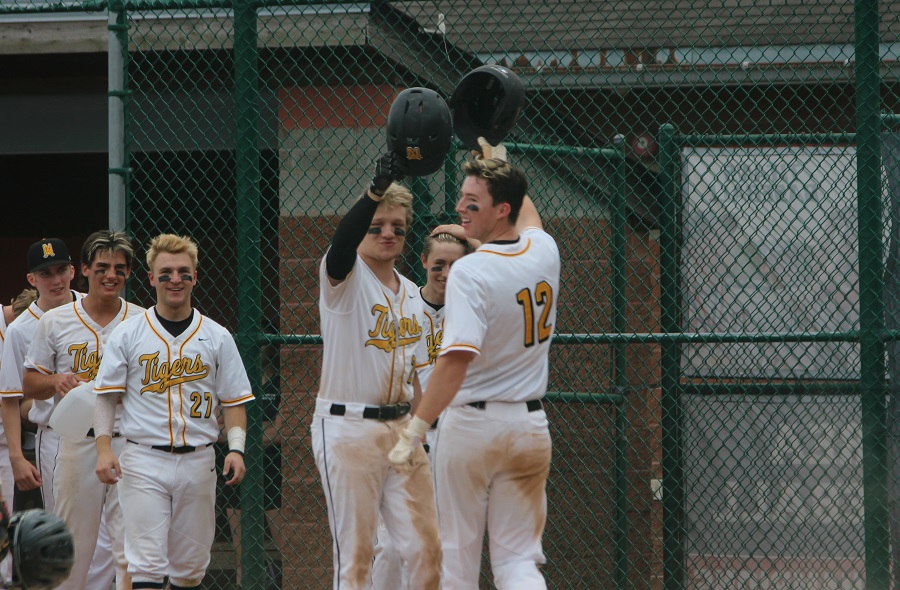 On the strength of a seven-run third inning and 10 stolen bases, top-seeded North Allegheny ran away from the eighth-seeded Upper St. Clair Panthers for a 12-2 win in five innings in the WPIAL Class 6A quarterfinals on Saturday at Matulevic Field. Senior first baseman Danny Gallon led the offensive charge with a 3-for-3 performance, including a double, a stolen base and four RBI’s, earning Wright Automotive Player of the Game honors.

Facing a resilient Upper St. Clair team that earned a walk-off win over Canon-McMillan the day prior, North Allegheny capitalized on an early scoring chance in the first inning. After a two-out walk and stolen base by Cole Young, Gallon drove in the game’s first run with an RBI single for 1-0 lead.

The Tigers increased the lead to 3-0 in the second inning thanks to a sacrifice fly by Erik Sundgren and a two-out RBI single from Ethan Gavlik.

The third inning proved to be the turning point in the contest. Fresh off a comeback victory, the Panthers attempted to claw back in the top of the third with an RBI double by Owen Mandler and an infield RBI single courtesy of Jack Shearer, cutting the NA lead to 3-2. With nobody out and the bases loaded, the Tigers wiggled out of the jam with no further damage. Starting pitcher Kyle Demi induced a fielder’s choice ground out at home plate off the bat of Hunter Schroeck for the inning’s first out. Demi then struck out back-to-back batters to slam the door on USC and kept NA’s one-run lead intact.

With Upper St. Clair failing to capitalize on its golden opportunity in the top of the third, North Allegheny blew the game wide open a half inning later. In the bottom of the third, Young led off the inning with a double and scored moments later on an RBI single from Gallon for a 4-2 lead. On the next pitch, Spencer Barnett crushed a breaking ball over the rightfield fence for a two-run homer, his sixth of the season, ballooning the NA advantage to 6-2.

Not done yet, the Tigers tacked on four more runs before the inning’s conclusion. Andrew Dougherty scored on a wild pitch, Sundgren crossed the plate on a double steal and Gallon drove home two more with a double, bringing the score to 10-2, North Allegheny. In the fourth, Sundgren increased the score to 12-2 with a two-run single.

North Allegheny improves to 18-3 overall with the victory, while Upper St. Clair’s season ends with a 9-10 record. The Tigers advance to the WPIAL semifinals to face section rival Butler on Monday at 4:30 p.m. at Matulevic Field. The game will be broadcast live via the internet on the North Allegheny Sports Network.