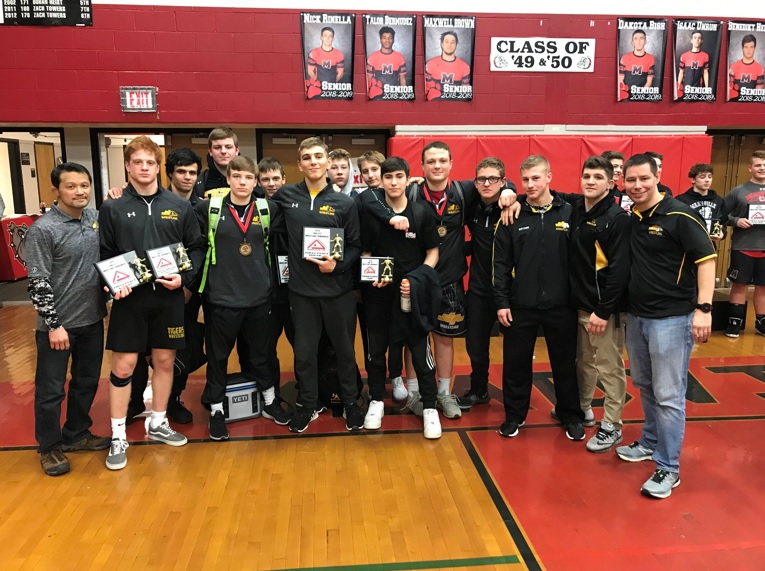 Three Tigers won gold to help the North Allegheny wrestling team to a third-place finish at the Tool City Tournament in Meadville, PA over the weekend. In all, eight Tigers medaled for a team score of 171.5 at the two-day tournament. Brockway came in first place with a score of 178, finishing narrowly ahead of Penns Valley, who took second place with a score of 176.

Four North Allegheny grapplers reached the finals in their respective weight classes with three winning gold. Freshman Dylan Coy earned a win by fall in all three of his bouts in the 106-pound bracket, including a pin of General McLane’s Hunter Robinson at 3:43 of the championship bout.

Junior Nick Marcenelle used a win by fall and three major decisions to roll to a first place showing at 160 pounds. Marcenelle defeated Clearfield’s Mark McGonigal in the finals by major decision, 11-0.

At 170 pounds, VMI commit Jon Hoover defeated Abraham Allebach of Penns Valley by a 9-1 major decision to defend his title at the Tool City Tournament. Hoover also claimed a win by fall and a tech fall during his quest for gold and was named the outstanding wrestler of the tournament for his performance.

Sophomore Brady Leczo reached the finals at 152 pounds with a win by fall and two major decisions before falling to Meadville’s Nick Rinella in the final.

Other NA medalists included Freddy Junko (126) and Ben Grafton (220), who each took fourth place. Sophomore Brad Stipetich (113) and junior Ian Branstetter (138) claimed sixth and eighth place, respectively. For a look at all of the brackets at the Tool City Tournament, click here.