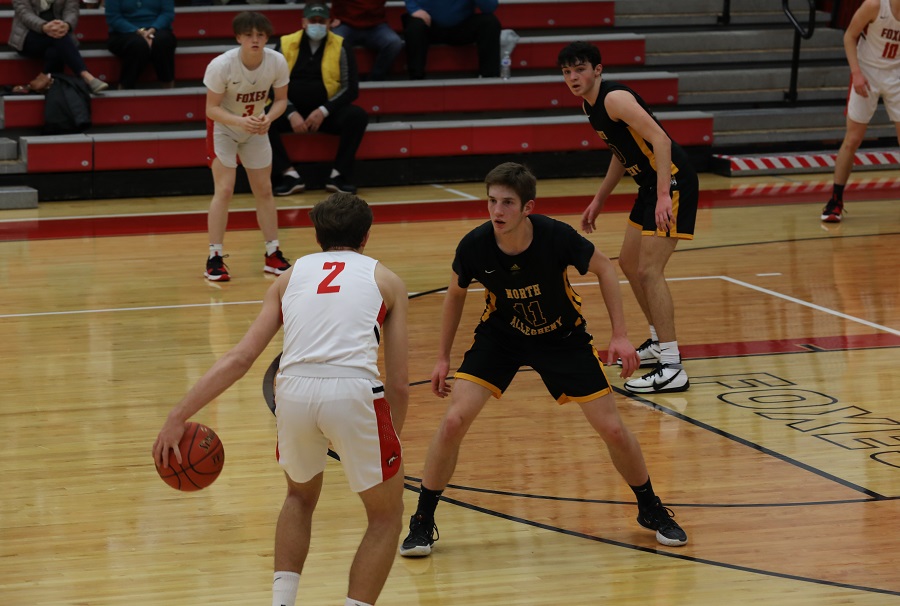 Tigers Bow Out Of WPIAL Playoffs With Loss To Fox Chapel

Making its first appearance in the WPIAL quarterfinals since 2015, the North Allegheny boys’ basketball team dropped a 74-56 decision at Fox Chapel on Friday night.

Hoping to capitalize on a distinct size advantage down low, the Tigers fed the post early and grabbed a 6-2 lead in the first quarter with one basket by Greg Habib and four points from Khalil Dinkins. However, Fox Chapel responded with an 11-0 run and held the lead for the remainder of the night. Junior Russell Fenton played a key role for the Foxes’ first quarter surge with six points on his way to a 13-point performance.

The Foxes increased their lead to 14 points in the second quarter at 22-8 before the Tigers inched their way back. The hard work of Habib and Dinkins on the offensive glass, and a timely 3-pointer by Matt McDonough, drew the Tigers back to within six points at 29-23 midway through the second quarter. Once again, Fox Chapel answered back and closed the half on a 7-1 run to take a 36-24 lead into intermission.

Down the stretch in the second quarter the NA forwards, including Habib, Dinkins and senior Ethan Lake all found themselves in foul trouble which impacted the Tigers ability to control the paint in the second half. Dinkins did well to avoid fouling out in the second half and did his best to keep the Tigers afloat with 18 points and nine rebounds. For his efforts, Dinkins was named the Wright Automotive Player of the Game.

Despite NA’s best efforts, Fox Chapel continued to pull away in the second half and closed out a 74-56 win to advance to the WPIAL semifinals for the first time since 2015. Junior Eli Yofan paced the Foxes with 22 points and surpassed the 1,000-point plateau in the second half. In addition to Yofan and Fenton, three others also reached double figures. Kent Baldauf poured in 4-of-6 shots from beyond the arc for a 16-point night, while J.P. Dockey and Jacob DeMotte chipped in with 11 and 10 points, respectively.

For North Allegheny, joining Dinkins in double digits were McDonough and Habib. McDonough dropped in 3-of-6 from the perimeter and closed the evening with 13 points, while Habib added 12 points before fouling out.

With the outcome, North Allegheny’s season comes to a close with a 16-7 overall record. Fox Chapel moves onto the semifinals with a 20-2 mark and will face the Pine-Richland Rams on Tuesday night. Congratulations to head coach Dan DeRose and the entire NA boys’ basketball team for a resurgent 2021 season.