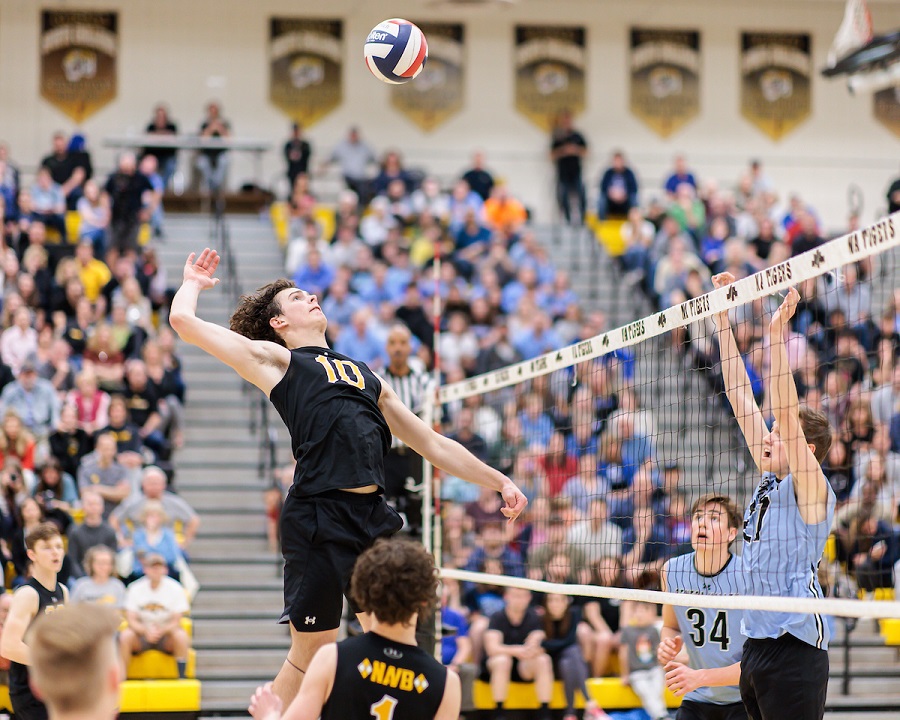 Tigers Claw Past Cougars In PIAA First Round, 3-0

The North Allegheny boys’ volleyball rolled to a 3-0 sweep over Palmyra in the opening round of the PIAA Class 3A playoffs on Tuesday night. The Tigers earned the home playoff win by set scores of 25-19, 25-22 and 25-18.

In their first ever head-to-head meeting, North Allegheny erased an early 2-0 deficit against Palmyra in the first set with a 5-0 run. With the exception of a 5-5 tie, the Tigers led the rest of the way and earned a 25-19 win. Senior libero Ryan Treser notched two of his three aces on the night in the first set to help NA pull away.

In set two, the fourth-place team out of District 3 went toe to toe with the Tigers and were tied 20-20. Senior Logan Smith, an Elizabethtown College commit, spearheaded the effort for the visiting Cougars with seven kills in the set. However, Smith’s efforts were not enough as North Allegheny outlasted Palmyra for a 25-22 win, finishing off the game on a kill by senior Jack Birch. Birch ended the night with seven kills and a team-high three blocks.

A consistent force throughout the evening was senior Cole Dorn. The Saint Francis University commit matched Smith swing for powerful swing and led North Allegheny to a 25-18 victory in the third set. Dorn finished with a team-high 15 kills and earned Wright Automotive Player of the Match honors.

Also contributing to the offense was junior Jax Wilhite with six kills and junior Varun Kaveti with five kills. Senior setter Caleb Schall dished out 26 assists and Treser paced the defense with 14 digs.

With the win, North Allegheny improves to 15-1 on the season, while Palmyra’s year comes to an end with a 14-4 mark. The Tigers will take on section rival Shaler in the PIAA quarterfinals on Saturday at a site and time to be determined.