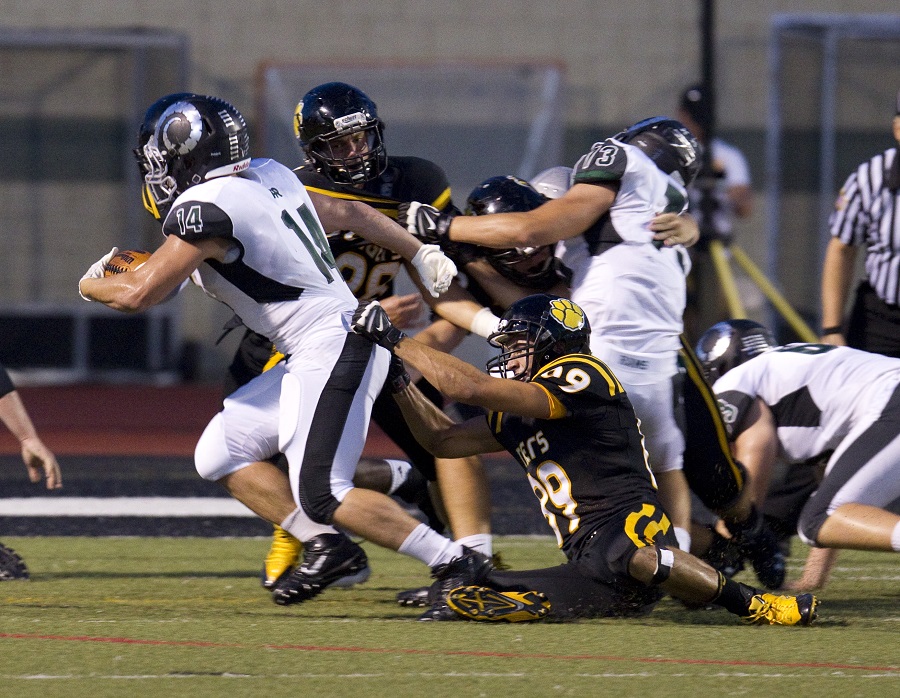 The matchup between the North Allegheny Tigers and Pine Richland Rams was touted as a battle of heavyweights in the Quad A Northern Eight Conference. Last season the Tigers held off the Rams 29-28 and the Rams missed a 40-yard game winning field goal attempt in the waning seconds of the game. This year Root Sports would feature the battle Live as their Game of the Week. The game lived up to the hype and then some. However it would be the Tigers missing two late fourth quarter field goal attempts that would have given them the lead and the game would be decided in overtime.

The high powered Ram offense came out of the gate firing on all cylinders. The took the first drive of the game nine plays 77 yards in under two minutes. Ram quarterback Ben DiNucci connected with a diving D’Ondre Gastion from 28 yards in the corner of the end zone. Adam Napotnik would convert the extra point to take the early 7-0 lead. Five minutes later the Rams would convert quickly again as they put together a 5 play 57-yard drive that was capped off by 6-yard run by Connor Slomka. Napotnik would convert again and the Rams led 14-0.

The Tigers were in need of an energizer and they found one on the ensuing kickoff when Clay Byerly returned it 90 yards for the NA touchdown. Seth Mancuso would nail the extra point and the Tigers trailed 14-7 with 4:44 remaining in the first quarter. After a first quarter of fireworks out of the Rams offense the Tiger defense was able to make adjustments and seemed to tame the Rams. The score remained 14-7 until late in the second quarter when NA quarterback Jeff Clemens would take command of a 16 play 77-yard drive. Clemens who had 115 yards rushing on the evening picked up 6 of those yards with a touchdown run. With just 32 seconds remaining in the first half Mancuso converted the extra point and the teams would go to half time all square at 14.

In the third quarter the DiNucci orchestrated another long drive for the Rams. This one would go for 13 plays and 86 yards. Slomka would punch in his second TD of the night from the yard line. Napotnik would convert the extra point and Rams took the 21-14 advantage. Not to be outdone the Tigers answered with a 15 play 80 yard drive of their own. Byerly would pick up his second touchdown of the evening when ran it in from 6 yards out. Mancuso’s kick was good and with just under 9 minutes remaining in regulation these two heavyweights were knotted at 21.

The Tigers defense was stout in the fourth quarter. The Rams had penetrated deep into Tiger territory when they found themselves in a fourth down and five situation on Tiger 24 yard line. The Rams would go for it on fourth down and Senior Tiger defensive back James Lamanna put on a crushing hit to break up a sure first down. The Tigers would take over on downs. NA would then drive deep into Ram territory when they faced a 3rd and 10 at the 35-yard line. Byerly would come up big again this time in the air when Clemens found him for a 22-yard strike. The Tigers would look to Byerly again on 3rd and 9 from the 13. Clemens put the ball on Byerly’s hands at the goal line but the Ram defense was able to break up the pass. Mancuso would attempt a 30 yard field goal from the left hash for the late fourth quarter lead but the ball hit the right post and veered out.

The Tiger defense would yield some ground but pounced again and forced a turnover. With under a minute to go in regulation Layne Skundrich sacked DiNucci forcing a fumble that resulted in a 27-yard turnover. With just five seconds on the clock these two teams found themselves in a similar situation to last year. Coach Walker would give Mancuso another shot to win the game. This attempt was from the center of the field but from 49 yards out and while Mancuso struck it well he came up just a few feet, not yards, short. This epic battle was forced to be decided in overtime.

The Rams would win the toss and choose defense. Each team would take turns from the ten yard line. The Tigers were unable cross the goal line and settled for a 27 yard Mancuso field goal. They would look to their always tough defense to stop the Rams from 10 yards out to win the game. After an incompletion on first down Skundrich would come up with his second sack of the game when he dropped DiNucci for a 16 yard loss. DiNucci tried to get rid of the ball and the Tigers thought they had recovered another fumble and won the game when the referee stepped in and ruled DiNucci down by contact. The Rams were faced with a third and goal from the 26 down 24-21. DiNucci would show his grit again finding Brandon Ballay for a 26 yard touchdown down the right sideline with a touch pass in coverage for a Pine Richland touchdown. He finished the night completing 30 of 41 passes for 342 yards and two touchdowns. Ram receiver Anthony Battaglia caught 10 of those passes for 120 yards. Napotnik would tack on the extra point giving the Rams the 28-24 overtime victory.

The Pine Richland Rams are now 2-0 and the Tigers fall to 1-1. The Tigers will turn their focus to another Quad A powerhouse as they travel to Central Catholic next week.