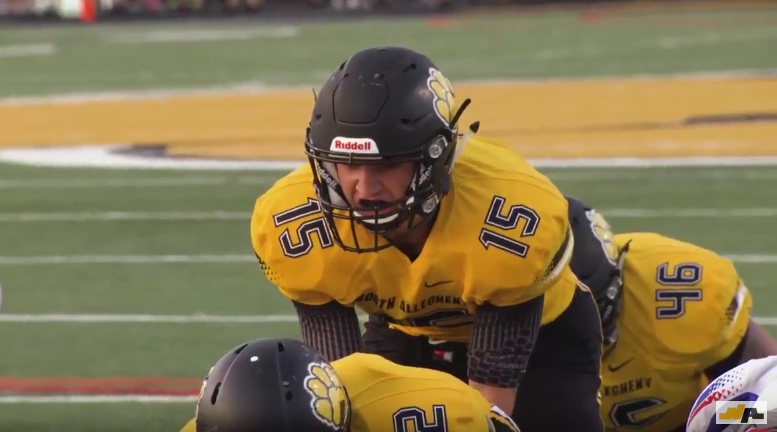 North Allegheny snapped its modest two-game losing streak and extended Shaler’s lengthy losing skid to 18 games in a row with a 55-7 thrashing of the Titans on Friday night at Newman Stadium. While it’s been a long time since the Titans have won a game against anyone, it’s been even longer since they’ve defeated North Allegheny. The Tigers have won 30 of the past 31 head-to-head meetings. Shaler’s last win against NA was a 17-0 decision back in 1987.

It was White who opened the scoring on the second play from scrimmage by racing 63 yards for a touchdown just 28 seconds into the game. Following a Shaler punt, the Tigers drove 76 yards on seven plays and culminated the drive on White’s second touchdown of the night, a 2-yard run with 5:50 to go in the first quarter for a 14-0 lead.

From that point on, the rout was on. The Tigers added touchdowns in the opening stanza on a 56-yard jet sweep by Luke Collella and a blocked punt and 1-yard return for a score by Dante Caputo. The extra point attempt failed following the Caputo touchdown and the Tigers held a 27-0 lead.

Shaler scored its only points of the night in the second quarter on a eight play, 60-yard drive. The Titans capped its best possession of the evening with a 4-yard run by Jake Pollak to trim the score to 27-7, North Allegheny.

The Tigers added on to their lead when fullback Ryan Langdon bulldozed his way through the Titans for a 21-yard touchdown run with 7:10 to play in the half for a 34-7 advantage. Ben Maenza plunged into the end zone on a 1-yard score and Luke Trueman fired a 26-yard touchdown pass to Cory Melzer to bring the score to 48-7 at the half.

In the third quarter, Maenza dashed into the end zone for his second touchdown of the night on a 4-yard run to finish off the Titans for a 55-7 triumph. Maenza finished with 36 yards on seven carries. Trueman rushed for 54 yards and was a perfect 4 for 4 through the air for 94 yards and a touchdown. Trueman was named the Wright Automotive Player of the Game by the North Allegheny stats crew.

North Allegheny improves to 2-2 on the season and 1-1 in the Northern Seven Conference. Shaler falls to 0-4 overall and 0-2 in conference play. The Tigers visit the Butler Golden Tornado in week four. The Titans host the Penn Hills Indians next week.