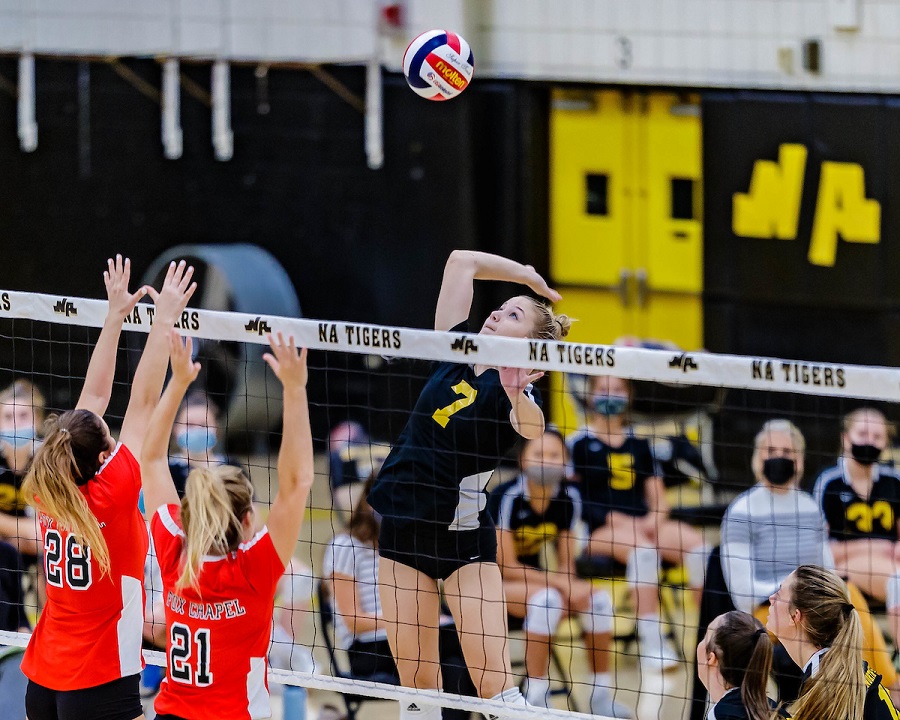 The North Allegheny girls’ volleyball team cruised to a 3-0 sweep over the Fox Chapel Foxes on Thursday night in Section 1-AAAA action. The Tigers earned their 24th consecutive win by set scores of 25-10, 25-8 and 25-7. NA was won 90 of its last 91 matches.

Thursday’s matchup pitted two teams from opposite ends of the spectrum as the four-time reigning state champs faced off against a youthful Fox Chapel team looking to rebuild. The Tigers controlled the contest from start to finish and rolled to a 25-10 win in set one on the strength of six kills and two blocks from Jadyn Perkins. The senior middle hitter finished with a team-best nine kills.

Fox Chapel took an early 3-0 advantage in set two, but the lead proved short-lived as North Allegheny dominated the remainder of the set. Sophomore defensive specialist Avery Butcher notched four of her team-best five kills in the set, helping NA to a 25-8 win. On a night where the Tigers posted 12 aces, Butcher was named the Wright Automotive Player of the Game for her contributions.

It was more of the same in set three with North Allegheny using a 14-0 run to grab an 18-1 lead. Junior middle hitter Ella Zimmer contributed three kills and a pair of blocks to help the Tigers claim a 25-7 win and a sweep of the Foxes.

North Allegheny improves to 2-0 overall and in Section 1-AAAA, while Fox Chapel drops to 0-2 overall and in the section. The Tigers will visit the South Hills on Saturday to take part in the Upper St. Clair Invitational.