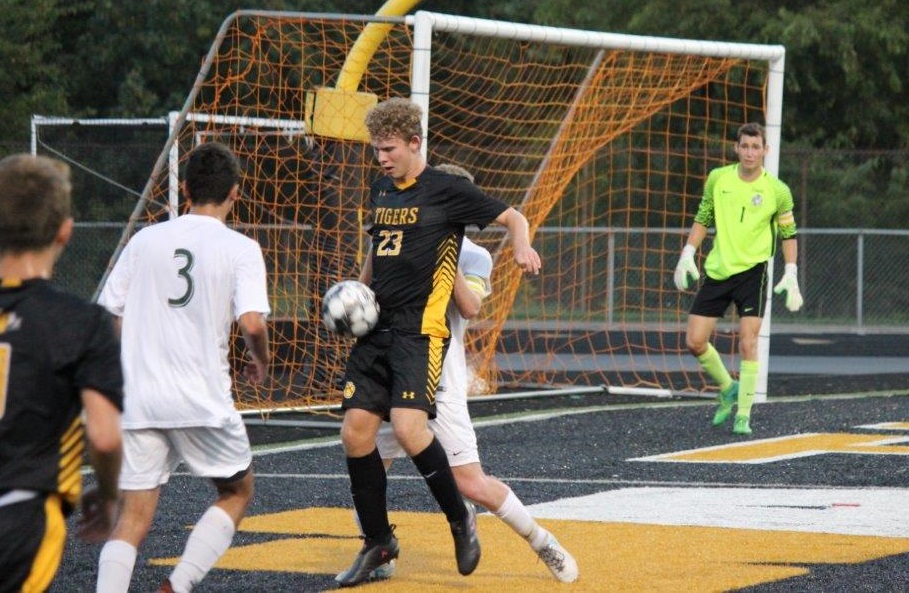 Not since 2014 had the North Allegheny boys’ soccer team played a game against the Allderdice Dragons. In that contest four years ago, the Tigers defeated the Dragons by a 3-0 decision in the opening round of the WPIAL playoffs. Now members of the same section in Class AAAA, North Allegheny again blanked Allderdice, this time for a 1-0 victory in the Section 1 opener.

The reigning WPIAL champions began the contest with spirited play and spent most of the first half with the field tilted in their direction. As a result, the Tigers had the best scoring chances in the early going. With 29 minutes remaining in the first half, senior Sam Wilson clanged a shot off the right post. With just over eight minutes left in the half, junior Luke Anderson drove a hard shot that also caromed off the right post as the game remained scoreless. Anderson had another good opportunity with 15 seconds left before halftime but he lofted a shot narrowly high to keep the score, 0-0, at intermission.

In the second half, Allderdice played much tighter with North Allegheny and spent a bit more time in the Tigers defensive zone. Despite the uptick in intensity from the Dragons, they could not penetrate the NA defense. Senior goalie Devon Angermeier was rarely tested by Allderdice as he and the defense posted their second straight shutout of the young season.

With Angermeier and the defense holding Allderdice in check, North Allegheny finally broke the scoreless deadlock when Nick Bridges raced past a defender on the right wing and sent a centering pass to junior Jonathan Ross who drove the ball in the net with 12:09 remaining in the game for 1-0 lead. As a constant presence of energy throughout the game, and for delivering a crucial assist on the game-winning goal, Bridges was named the Wright Automotive Player of the Game.

The Ross goal proved to be the only one on the night as North Allegheny claimed the win to improve to 2-0 on the season and 1-0 in Section 1-AAAA. Allderdice falls to 0-1. The Tigers will visit section rival Seneca Valley on Thursday night.