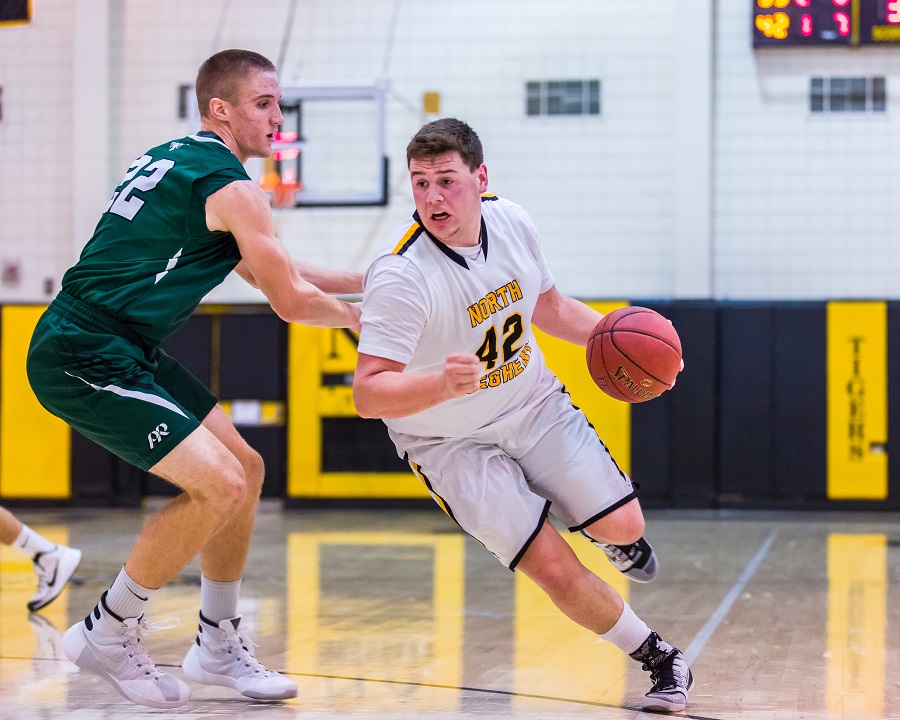 Senior Matt Bilyak only scored four points on Friday, but his layup with under a minute remaining in the fourth quarter proved to be the difference as Pittsburgh Central Catholic edged North Allegheny in a Quad-A Section 3 contest at Alumni Hall in Oakland, 47-44.

With the score tied 44-44 and the Vikings showing signs of holding for one shot, Bilyak got the ball in the left corner, drove the baseline and scored with 45 seconds left to break the tie. After a missed shot by North Allegheny super sophomore Curtis Aiken, Central Catholic got the ball and was able to kill clock until Bobby Kiernan made one of two free throws with only 12 seconds left. Keegan Phillips missed a three with 4 seconds left and Ray Sandherr’s desperate heave at the buzzer just missed tying the game.

A closely officiated game made it hard for either team to find a rhythm on offense. While both teams handled the other teams full court pressure, both the Vikings and Tigers were marvelous all night in their half-court defense, making it tough for each team to get open looks. Thus the score was only 12-11 Central after one quarter and 22-18 Vikings at the half.

Aiken, the Tigers leading scorers and one of the top point leaders in Quad-A basketball, was kept off the score sheet in the first half and ended up with only 8 points. However hard work underneath by Griffin Sestili kept NA in it as he led the team with 14 points including several second chance buckets.

Meanwhile Kiernan, the Vikings top scorer this winter, also struggled from the field, ending up with only nine points. Another top sophomore led the way for Central catholic as Luke Nedrow scored 17 points on a nice combination of inside work and outside shooting.

After the Vikings fell behind early 8-1, they went on an 15-3 run that carried into the second quarter and took the lead that they help until late in the third quarter. The teams were tied at 32 after three and it set up a back-and-forth final quarter that wasn’t decided until the final buzzer.

The victory gives Central Catholic a season sweep over North Allegheny, but more importantly clinches a Quad-A playoff berth and keep the Vikings section title hopes alive as they are 1/2 game behind front running Pine-Richland heading into the final week of the season. Central only has one more section game left, a visit to Butler on Tuesday.

Meanwhile, North Allegheny now needs to win and get help just to qualify for this year’s postseason. The Tigers are a game behind Butler for the final playoff spot and will host Seneca Valley on Tuesday before visiting rival north Hills on Friday. If NA and Butler end up tied for fourth place in AAAA-3, both teams will qualify for the playoff based on the two teams splitting their regular season games this year.