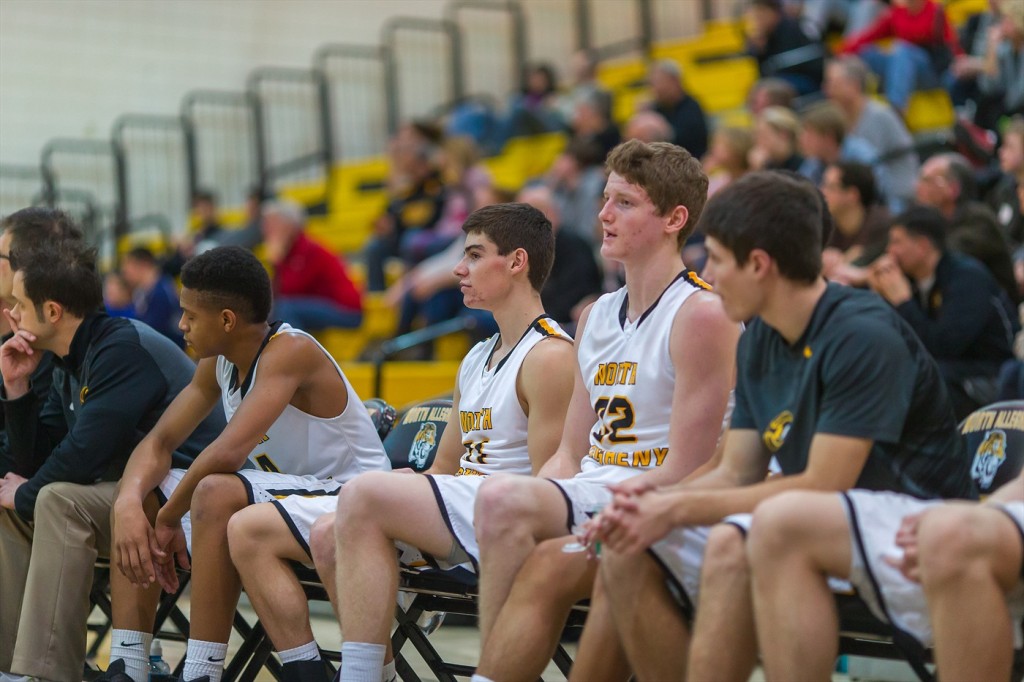 A desperation 3-pointer by Cole Constantino in the final seconds came up short as North Allegheny fell in a heartbreaker to Harrisburg, 65-62, in the second round of the PIAA playoffs.  With Harrisburg leading by three points and a chance to bury NA with six seconds to play, senior Frank Wilson missed two free-throws and the Tigers still had life.  Following a rebound by Mike Fischer, North Allegheny got the ball into the hands of its top scorer with a chance to tie, but the Cougars double teamed Constantino and the 3-point prayer uncorked by the NA senior went unanswered.  Harrisburg advances to the quarterfinals to face Allderdice on Saturday.

North Allegheny stormed out of the gates to an 11-2 lead in the first quarter, but Harrisburg answered with a 19-2 run to grab a 21-13 lead in the second period.  The Cougars were paced by Holy Cross recruit Jahaad Proctor and sophomore Chris Whitaker who combined for 14 points in the first half.  Harrisburg outrebounded the Tigers, 35-26, and held a five-point lead before NA rallied back to tie the game at 24-24.  The game was deadlocked at 26-26 in the waning seconds of the second quarter when Proctor hit two free throws to put Harrisburg up at the half, 28-26.

As it did in the first half, North Allegheny opened the second half strong with a 14-6 run to take a 40-34 lead. Constantino led the Tigers with 21 points on the night and three 3-pointers in the second half. For his efforts, Constantino was named the Wright Automotive Player of the Game.

Harrisburg rolled off a 7-0 run to take a 41-40 lead and traded jabs with North Allegheny through the majority of the second half.  The Tigers refused to go away and led 51-50 midway through the fourth quarter.  Helping NA battle in the trenches was sophomore Griffin Sestili who tallied seven of his nine points in the second half, and senior Will Sandherr who netted all of his nine points in the final 16 minutes.

The Cougars bounced back and led by as much as seven points, 60-53, in the final two minutes of the game thanks to Proctor who was 7 for 8 from the free throw line and finished with a game-high 22 points.  Whitaker added 16 points for Harrisburg.

Courtesy of some clutch shooting from Constantino, including a layup and a trey, the Tigers trimmed the deficit to 65-62 with seven seconds to play but could unfortunately come no closer.

North Allegheny’s season concludes with a record of 24-4, the fifth time in the last six years the Tigers have racked up 20 wins or more under head coach Dave DeGregorio.  The 24 wins is also the most in North Allegheny program history. Harrisburg improves to 22-8 on the season.  Congratulations to the NA boys’ basketball team and the Tigers coaching staff for another terrific season.