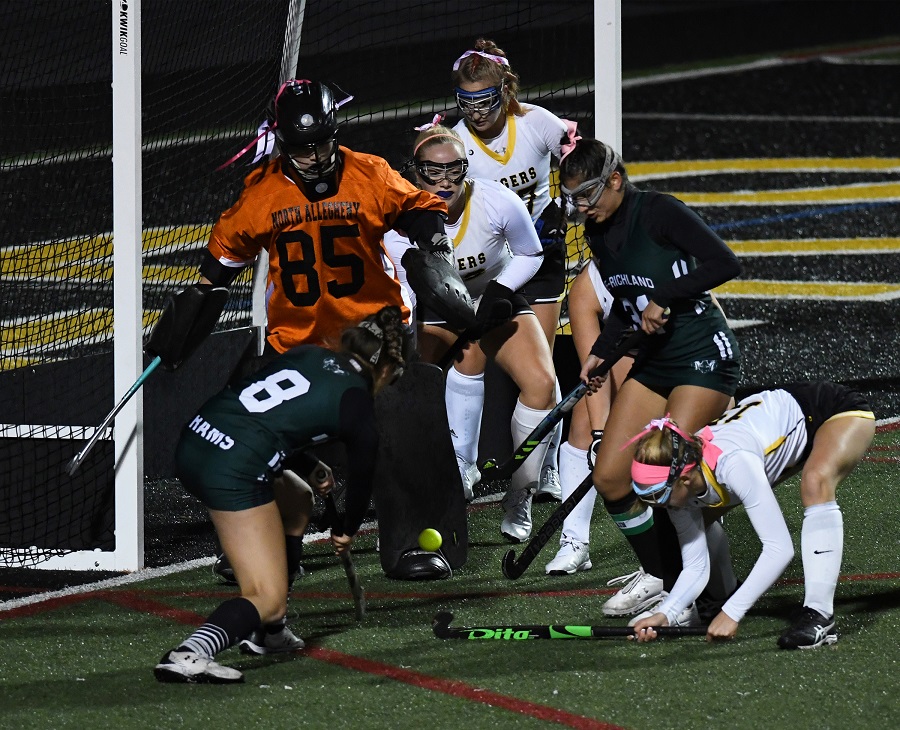 In a matchup between two playoff-bound teams in Class AAA, the North Allegheny field hockey team dropped a 3-0 decision to the Pine-Richland Rams at Newman Stadium. Wednesday night’s outcome, coupled with a Peters Township win against Fox Chapel, sets up a rematch between the Tigers and Rams next week in the WPIAL semifinals.

In the regular season finale, Pine-Richland dictated the pace in the early going and earned seven penalty corners in the first half. It was a penalty corner that produced the game’s first goal as Elaina Camino accepted a pass from Ava Loskoch and scored with 22:09 on the clock for a 1-0 Rams lead. Loskoch improved the PR lead to 2-0 with a reverse chip shot from 10 yards out with 6:43 remaining in the half.

Pine-Richland junior Ella Rottinghaus tallied the final marker of the night on a rebound with 23:51 to play in the second half for a 3-0 lead.

In the remaining minutes, the North Allegheny offense found some life and produced three penalty corners and five shots on net. Despite NA’s effort down the stretch, Pine-Richland finished off the game for a 3-0 win.

Stopping 16 shots on the night, North Allegheny freshman goalie Jordan Ashbaugh was selected as the Wright Automotive Player of the Game. Ashbaugh’s outstanding effort kept the Tigers within striking distance throughout the contest.

North Allegheny concludes the regular season with a 7-10-1 overall record and a 6-3 mark in WPIAL Division I. Pine-Richland earned a section title with a 9-0 record. The Tigers will enter the postseason as the No. 4 seed and will take on top-seed Pine-Richland on Wednesday night in the WPIAL semifinals. The game will be broadcast live by the North Allegheny Sports Network.