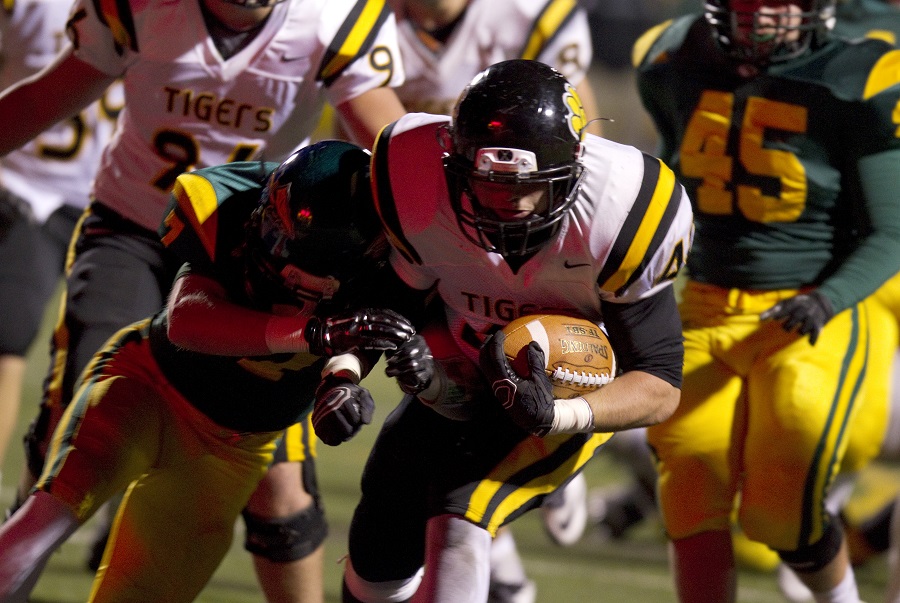 The North Allegheny Tigers dropped a heartbreaker in the WPIAL quarterfinals to the Penn-Trafford Warriors, 35-31, on Friday night at Fox Chapel High School. The Tigers built a 31-21 lead by early in the fourth quarter, but the Warriors stormed back in the final stanza to advance to the WPIAL semifinals for the second straight season. Penn-Trafford quarterback Brett Falloon threw for 280 yards and five touchdown passes, including two scoring strikes in the fourth quarter, to lead the Warriors comeback.

In a see-saw affair, the Tigers struck the opening blow with an 11-yard touchdown run by Josh Bergman in the first quarter to give NA a 7-0 lead.  After a fake punt went awry for the Warriors in second quarter at their own 18-yard line, the Tigers converted the miscue into three points on a 33-yard field goal by Seth Mancuso to increase the lead to 10-0. After a sluggish start, second-seeded Penn-Trafford woke up in the second quarter and scored on a 31-yard touchdown pass from Falloon to junior receiver Timmy Vecchio to trim the score to 10-7, Tigers, with 6:57 remaining in the second quarter.  Just before halftime, Falloon hit Joe Peduzzi for a 6-yard scoring pass for a 14-10 Penn-Trafford lead at intermission.

North Allegheny marched the opening possession of the second half 67 yards, and converted on a 4th and 2 deep in PT territory, for a 6-yard touchdown run by Bergman to vault the Tigers ahead, 17-14. The touchdown was Bergman’s second of the night as the senior tailback finished with 61 yards on 10 carries.  For his efforts, Bergman was named the Wright Automotive Player of the Game.

The Warriors ensuing possession ended on a fourth down play from the NA 40 yard line, when Laffoon was sacked by Paul Blendinger and coughed up the football to Eric Sprys at the Tigers 45.  One play later, the Tigers scored on a 55-yard reverse by Ethan Maenza to give the Tigers a 24-14 advantage.

From that point on, the game was a track meet with each team trading punches. Vecchio scored on a 44-yard screen pass with 2:15 to go in the third quarter to cut the Tigers lead to 24-21, but NA answered with a 24-yard touchdown pass by Jeff Clemens to Blendinger to bring the score to 31-21 with 11:51 remaining in the fourth quarter. Laffoon again responded with a touchdown pass, this time a 57-yard strike to Vecchio to make it 31-28, Tigers, with 8:50 to play.  Vecchio finished the night with eight catches for 197 yards and three touchdowns.

Following Vecchio’s score, the Warriors successfully recovered an onside kick and turned the gamble into points. An eight-play drive culminated on a 12-yard touchdown catch by Austin Zegarelli in the back of the end zone to put Penn-Trafford ahead to stay, 35-31.  North Allegheny had two more chances to answer but both drives ended on interception by PT’s Peduzzi to clinch to the quarterfinal victory for the Warriors.

With the win, Penn-Trafford remains undefeated at 11-0 and will battle the Central Catholic Vikings in the WPIAL semifinals next week. North Allegheny’s season ends with an 8-3 record. Congratulations to head coach Art Walker, the coaching staff, and the Tigers football team for an outstanding 2014 season.

For a look at final team and individual stats, click here.