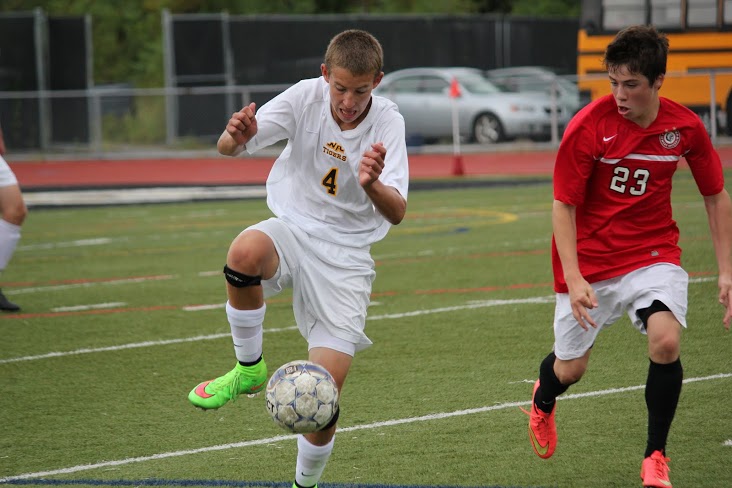 As was the case in three of the previous four meetings between the two teams, the margin of victory in Tuesday evening’s North Allegheny-Butler boys soccer game was a single goal. Unlike those three contests, though, which ended in overtime, the deciding goal in this most recent matchup was scored much earlier.

North Allegheny freshman forward Josh Luchini scored just over five minutes into the game, and the Tigers held on for a 1-0 victory over the Golden Tornado at Newman Stadium.

Luchini took a well-placed feed from senior captain Steve Binnig just inside the 18-yard box, took one touch to his right and buried a shot in the bottom right corner of the net. For his second tally of the season, Luchini earned the title of Wright Automotive Player of the Game. Binnig’s assist gave him four against the Golden Tornado in the past three meetings between the two teams.

While North Allegheny was unable to tack on any insurance goals throughout the remainder of the first half or in the second, the Tiger defense proved stout, as Butler mustered only one shot on goal. In net, senior goalkeeper Luke Nolan picked up the shutout, his first of the young season.

The Tigers return to action Saturday afternoon when they travel to Plum to battle the Mustangs. That contest gets underway at 2 p.m.  North Allegheny then returns to section play next Tuesday when they host Pine-Richland at 7:30 p.m.