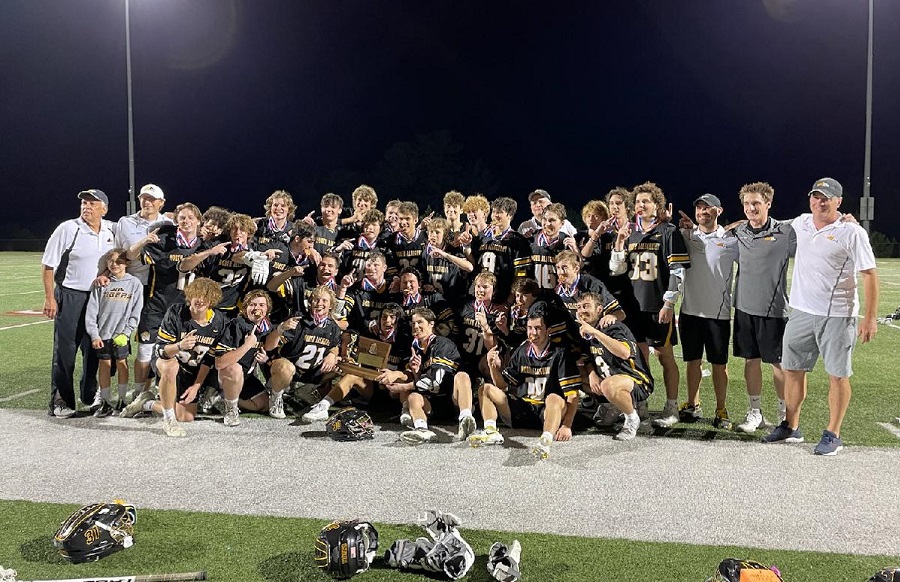 Five years ago to the day, the North Allegheny boys’ lacrosse team won its first ever WPIAL Class AAA championship. The Tigers celebrated the fifth anniversary of their championship by winning another WPIAL crown with a 9-8 triumph over the Shady Side Academy Bulldogs on Thursday night at Joe Walton Stadium at Robert Morris University.

On May 7, the Bulldogs defeated the Tigers in a regular season rout at Newman Stadium, 16-8, en route to the Section 2-AAA championship. However, with a WPIAL title at stake in the rematch, third-seeded North Allegheny found the right potion to knock off top-seeded Shady Side Academy.

From the outset, it looked like SSA might run away with the game by jumping out to a 5-1 lead after one quarter. The WPIAL Class AAA Player of the Year, sophomore Ethan Salvia, netted a hat trick in the opening stanza to jump start the Bulldogs.

The Tigers displayed their resiliency in the second quarter by scoring four of the next five goals to trim the deficit to 6-5 by halftime. After missing the entire season due to injury, junior middie Gavin Banyas saw his first action of the season in the championship game and sparked the NA comeback with a goal at the 3:33 mark of the second period. Freshman phenom Evan Lyon scored three more goals in the period to draw NA to within one at intermission. Lyon finished with four goals on the night, giving him 10 on the season. Eight of his 10 goals have come in the postseason.

Riding a wave of momentum, North Allegheny dominated the third quarter with an opportunistic offense and a swarming defense. The Tigers tied the game at 6-6 on a goal by Seton Hill commit, Ben Rohan, just 54 seconds into the third quarter. Only 26 seconds later, senior Nick Eck tickled the twine to give NA the lead, 7-6. Sophomore Marc Bartolomucci and junior attack Cole Bordo added back-to-back markers to increase the NA advantage to 9-6 by the end of the third quarter. For Bordo, his goal was his team-leading 30th of the season.

Facing one of the most explosive offenses in the WPIAL, North Allegheny silenced Shady Side Academy for 24 straight minutes before the Bulldogs finally touched the scoreboard again midway through the fourth quarter. With 5:20 remaining, Salvia struck for his fourth goal and tallied another marker with 4:44 left to play, cutting the NA lead to 9-8.

In the final minute, the Bulldogs fed their star player yet again to try and find the equalizer. However, senior goalie Aiden Miller came through with a huge save to deny Salvia and kept NA in front. Shady Side Academy had one final chance in the waning seconds of the game but a caused turnover and ground ball by Marco Pascarella secured a one-goal victory and WPIAL championship for the Tigers. Pascarella also played an important role in defending Savlia as the sophomore long stick middie drew the assignment of guarding one of the top players in the WPIAL. With four goals on offense for Evan Lyon and timely defensive stops by Marco Pascarella, the NA duo was named co-Wright Automotive Players of the Game.

Also playing an important role in the victory was faceoff man Ryan Barry, who kept NA in possession for much of the second quarter on. Another sparkplug was senior middie Mason Kress, whose field-shifting speed led to two first half goals for the Tigers.

With the WPIAL championship win, North Allegheny improves to 12-4 on the season and will face District 10 champion McDowell in the opening round of the PIAA playoffs on Tuesday. Shady Side Academy drops its first game to a WPIAL opponent all season and falls to 14-4 overall. The runner-up Bulldogs also advance to the PIAA tournament next week.