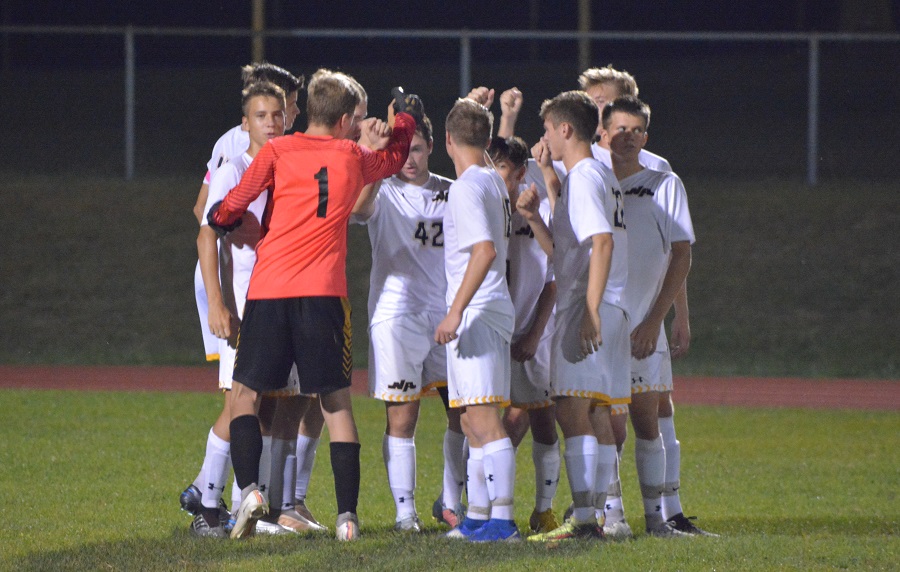 The North Allegheny boys’ soccer team traveled to Butler for a road section game on Tuesday night where the Golden Tornado had a pre-game ceremony raising Breast Cancer awareness on behalf of one of their teachers, Julie Bicanti, all wearing Pink t-shirts with the phrase “Kick it for B”.  Butler got the best of the Tigers with a 3-0 victory.

Starting in goal for the Tigers was junior Mikkel Hindsbo, with senior Jonathan Partridge out for the game with an illness.  Play was fairly even-up through the first 10 minutes of the game, although the sloped grass turf, the only one in the section, became extremely slick, causing both teams trouble in holding clean possession.  At 31:27 remaining in the first half, Butler got their first mark of the match from sophomore Landon Mohney.  Approximately 15 minutes later another goal was scored by Butler for a 2-0 lead.  The Tigers had limited quality scoring chances on the night given a staunch Butler defense and the slick grass.  One of the best, came at the at 5:08 remaining when Butler was called for a handball in the box and a penalty kick was awarded by the center ref.  Senior midfielder Will Cinker took the shot an hit a well struck ball heading on the grass toward the back, left corner, however the goalie guessed the right direction and made an outstanding save, keeping the Tigers off the scoreboard.

The second half was mostly uneventful as the grass continued to become slicker and quality possession seemingly unachievable for either team.  A few decent scoring chances were served up from junior midfielder Will Stasko and senior midfielder Justin Mericle, however none were able to be finished.  Butler added a third goal with 10 minutes remaining in the match to close out a 3-0 win.

The Tigers travel to Fox Chapel for another road section matchup on Thursday. The game will be broadcast live via the internet on the North Allegheny Sports Network.