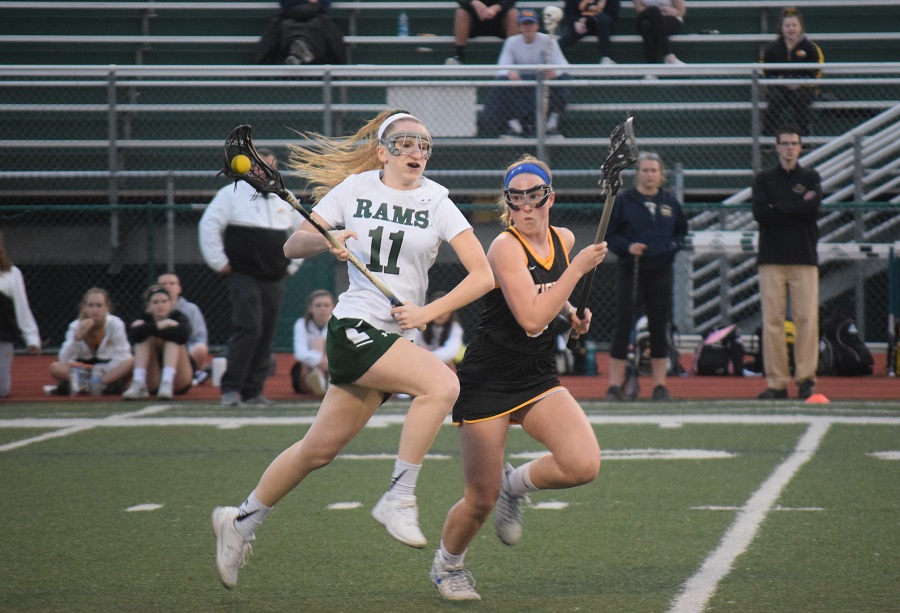 The North Allegheny girls’ lacrosse team dropped an 11-6 decision at Pine-Richland on Monday night in Section 2-AAA action. Pine-Richland was led by Mia Patzuk and Kendall Gessner, who both posted a hat trick.

The Tigers got off to a good start in the first 10 minutes of the game and took a 3-1 lead against the two-time reigning WPIAL champions. Paige Jones, Ryley McLellan and Lola Wilhite all scored for North Allegheny in its opening surge.

Part of NA’s early success was spurred on by Jones, who won 5 of 7 faceoffs and scooped up three groundballs. For her play, Jones was selected as the Wright Automotive Player of the Game.

Despite the early deficit, Pine-Richland swayed the momentum with five straight goals to take a 6-3 lead with 1:53 remaining in the half. It appeared the pendulum had swung back toward North Allegheny thanks to a Brooke Ferringer marker with 51 seconds in the half, trimming the PR lead to 6-4. However, Gessner scored with just three seconds left before halftime to give the Rams a three-goal lead again at 7-4.

With a methodical offensive style, Pine-Richland scored four of the final six goals in the second half to close out an 11-6 victory. North Allegheny received second-half goals from McClellan, who finished with two on the night, and sophomore Skye DePrado.

Following Monday’s outcome, North Allegheny slides to 3-3 overall and 1-2 in Section 2-AAA. Pine-Richland improves to 5-2 overall and 2-1 in the section. The Tigers will host Moon at 7:30 p.m. on Wednesday in another section contest.