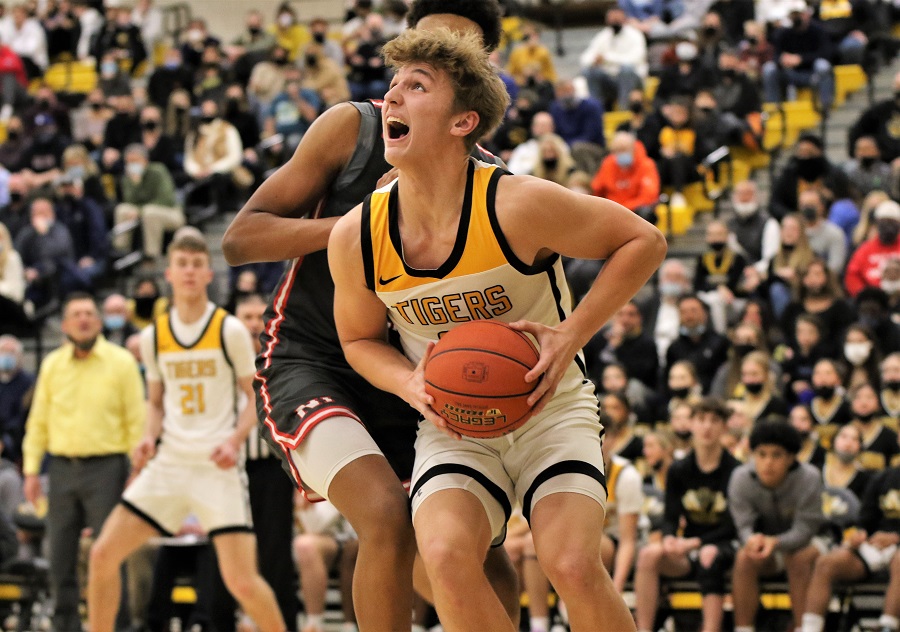 In a Class 6A clash on Friday night at North Allegheny, the second-ranked Tigers dropped a 69-59 decision to the top-ranked North Hills Indians.

In a back-and-forth affair, the visiting Indians jumped out to a double-digit lead in the first quarter and led by as much as 11 points, 24-13, late in the opening stanza. The hot shooting of senior guards Alex Smith and Mathew Seidl, who each scored 11 points in the period, set the tone for North Hills in the early going.

The Tigers roared back in the second quarter on the strength of senior guard Matt McDonough and senior forward Kolin Dinkins. McDonough netted 17 of his 20 points in the first half and hit a go-ahead 3-pointer with 30 seconds left in the half to vault NA in front 34-33. Dinkins was a force with his slashing drives and left-handed touch in the lane, scoring 11 of his 14 points in the first half. For his all-around efforts on the night, Dinkins was named the Wright Automotive Player of the Game.

Despite the NA second quarter surge, Smith knocked down a mid-range jumper from the baseline with five seconds left in the half to put North Hills back in front, 35-34, at intermission.

With the game tied 38-38, early in the third, North Allegheny used an 11-2 run to take its largest lead of the game, 49-40, with 2:56 left in the period. The run was capped on a Kyrell Hutcherson layup, who scored seven of his nine points, including a 3-pointer, during the third quarter spurt. Sophomore Joey Dopirak also contributed quality minutes off the bench and scored nine of his 11 points in the second half.

Following a North Hills timeout, the Indians responded with a 14-5 run to end the period and tied the game at 54-54 on a 3-pointer at the buzzer by senior William Blass.

In the fourth quarter, North Hills managed to pull away from North Allegheny for good and outscored the Tigers, 15-5, over the final eight minutes. Smith finished with a game-high 27 points, followed by Seidl’s 17 and sophomore forward Royce Parham added 16 points.

North Allegheny slips to 8-2 overall and 2-2 in Section 1-6A, while North Hills remains undefeated with an 8-0 mark and 4-0 record in the section. The Tigers will continue section play on Tuesday with a home matchup with the Seneca Valley Raiders at 7:30 p.m. The game will be broadcast live via the internet on the North Allegheny Sports Network.