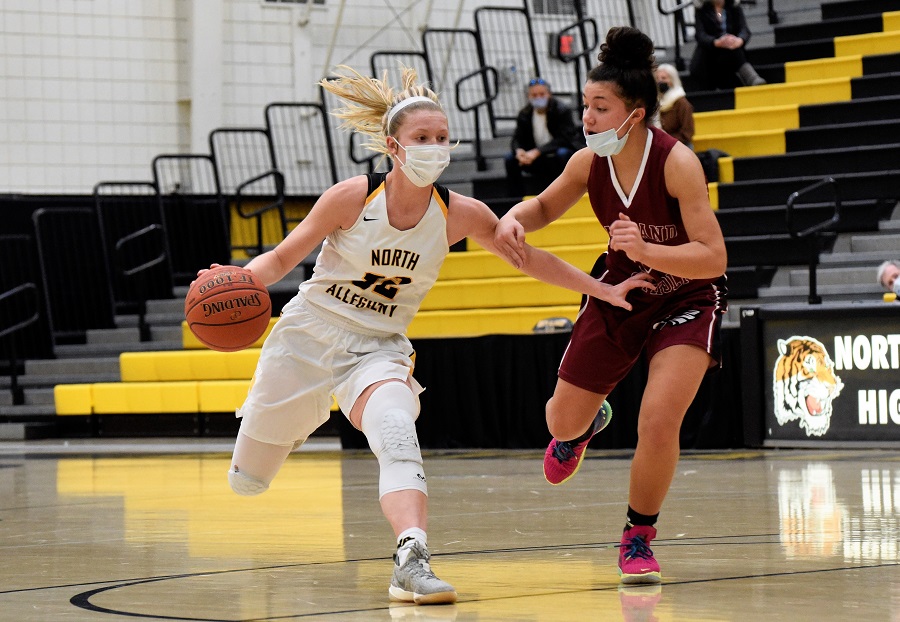 Tigers Ground The Eagles During The Hoops For A Cure Classic

North Allegheny girls basketball extended a winning streak dating back to last season to 24 games with a 61-42 victory over Oakland Catholic Saturday.

Both teams kept a smooth pace in the first half of play, with the Tigers and Eagles keeping the score close after one quarter, 17-14. Oakland Catholic found solid play from sophomores Alexa Washington and Rachel Haver in the first half, scoring 8 and 11 points respectively. North Allegheny was led by freshman Kellie McConnell who scored all of her 8 points in the first half. Senior Lizzy Groetsch also had 7 points at the half.

The Tigers pulled away in the second half, securing multiple 10 point leads throughout the game. Strong point guard play from sophomore Jasmine Timmerson, paired with timely points from senior Paige Morningstar ultimately secured the victory. Groetsch was a force on both the offensive and defensive of the ball, and earned Wright Automotive Player of the Game honors, finishing the game with a team-high 14 points.

The Tigers improve to 11-0 on the season with the win, and are back in action next week at home on Tuesday against Seneca Valley at NA. You can watch the action on the NA Sports Network at 5:00 p.m. (JV starts at 3:30 p.m.)

The Eagles fall to 5-7 with the loss.