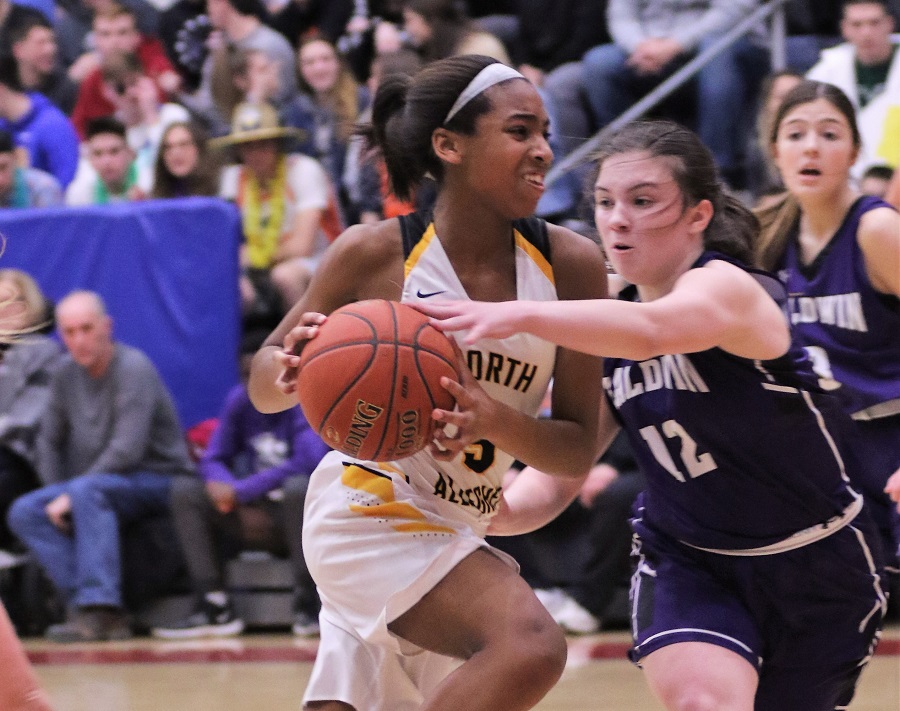 The North Allegheny girls’ basketball team advanced to the WPIAL Class 6A semifinals on Friday night with a convincing 65-46 victory over Baldwin at Chartiers Valley High School. The win was NA’s 20th of the campaign and marked the eighth consecutive year the Tigers have won 20 games or more in a season.

Facing a Baldwin team that was making its first WPIAL playoff appearance since 2015, North Allegheny stormed out of the gates and took a 16-2 lead in the first quarter. The Tigers were hot from beyond the arc and continued to scorch the Highlanders for a 40-20 halftime lead. NA knocked down 12 3-pointers on the night with eight coming in the first half. Sophomore Taylor Rawls poured in three treys to pace the Tigers at intermission.

Along with strong perimeter shooting, North Allegheny excelled on the offensive glass and was helped by the rebounding efforts of junior Paige Morningstar and senior Kat Balouris. The two forwards also defended the paint well by blocking numerous Baldwin shot attempts.

In a well-balanced performance, North Allegheny led by as much as 31 points and coasted to the victory in the second half, 65-46.

Leading on the scoresheet was junior Lizzy Groetsch and freshman Jasmine Timmerson with 16 points each. Morningstar also touched double figures with 14 points. Baldwin was paced by junior Lexi Bernotas, who scored all nine her points coming in the first half.

Timmerson, who contributed three 3-pointers and helped facilitate the Tigers attack, was selected as the Wright Automotive Player of the Game.

With the win, North Allegheny improves to 20-3 on the season, while Baldwin falls to 12-10 on the year. The Tigers advance to the WPIAL semifinals to face Upper St. Clair on Tuesday at a site and time to be determined. The game will be broadcast live via the internet by the North Allegheny Sports Network.