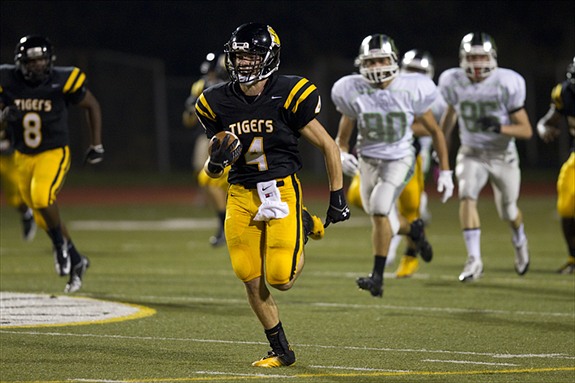 Following a rousing 14-0 victory over Seneca Valley last week, the North Allegheny Tigers will open their home schedule with a tough Northern Eight Conference meeting with the Pine-Richland Rams tonight at Newman Stadium.

The Tigers defense forced six turnovers last week, including three Riley Trueman interceptions, to blank the high-powered Raiders.  Tonight the Tigers will face another team that boasts a wealth of experience and talent on offense at the skill positions. Quarterback Ben DiNucci is a good decision maker with a quick release who tossed four touchdown passes last week, two each to Mike Merhaut and D’Ondre Gastion.  Merhaut reeled in seven passes for 169 yards.  On the ground, the attack is powered by hard-nosed tailback Connor Slomka who rushed for over 1,100 yards last season.  Slomka has committed to Army to play football next season.

Like North Allegheny, Pine-Richland’s defense is also coming off a shutout with a 42-0 pasting of the Shaler Titans last Friday night.  The Rams defense will have to contend with a Tigers offense that’s operated by quarterback Jeff Clemens.  The senior signal caller accounted for 107 yards on the ground and another 167 through the air in NA’s win over Seneca.  Complimented by change of pace QB Riley Trueman who will press the edges, the Tigers can attack in between the tackles just as effectively as the edges of the defense. Senior tailback Josh Bergman is back to full health and eager to carry the load against the Rams tonight.

North Allegheny hosted the Rams last season at Newman Stadium and held off Pine-Richland in an exciting 29-28 victory.  A 40-yard field goal attempt by Pine-Richland’s Ben Engel with six seconds remaining, fell just short of the cross bar in last year’s narrow win for the Tigers.  North Allegheny looks to dash the hopes of the high-octane Rams tonight with kickoff set at 7:30 pm.  The game will be broadcast live via the internet on the North Allegheny Sports Network.  Lee Mohn and Rick Meister will have the call starting at 7:15 pm with the pregame show.  To listen to tonight’s broadcast, click here.