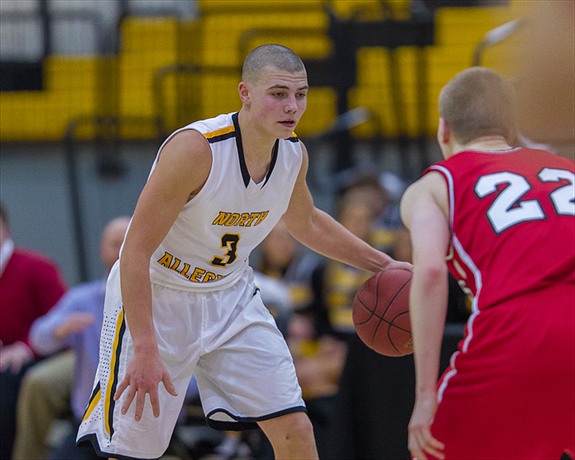 North Allegheny shook off a cold first half with 50 percent shooting in the second half and ran away from the Norwin Knights in the opening round of the WPIAL playoffs, 66-36, from Fox Chapel High School on Wednesday night. The Tigers connected on only 9 of 30 shot attempts in the first 16 minutes, but NA still led 23-13 at halftime thanks to just 20 percent shooting from the Knights.

North Allegheny outrebounded Norwin, 41-27, and collected 13 offensive boards which proved critical during the light scoring first half. Senior Elijah Zeise cleared the glass for nine rebounds for the Tigers.  While the offense was sputtering early, senior Mike Carter kept NA in the lead with seven first half points.

In the second half, the third-seeded Tigers finally found their shooting rhythm, which allowed the NA pressure defense to assert itself and force Norwin into 21 turnovers.  North Allegheny was without leading scorer Cole Constantino (12.8 ppg) due to injury, but the Tigers didn’t miss a beat with junior guard Mike Fischer getting the start in Constantino’s stead. Fischer led the way with 14 points and eight rebounds, earning him Wright Automotive Player of the Game honors.

The Tigers were also aided by Luke Gwaltney’s 12 point night and 4 of 4 shooting from the free-throw line. For the Knights, senior Drew Morgan came off the bench to post a team-high nine points, going 3 for 3 from beyond the arc. North Allegheny limited Norwin’s top shooter Curtis Perz to just six points on 3 of 12 shooting.

With the win, North Allegheny sits at 20-3 overall and will face Section 1 champion Hempfield in the WPIAL Quarterfinals.  The game will be broadcast live via the internet on the North Allegheny Sports Network. Norwin ends the year with a mark of 13-10.