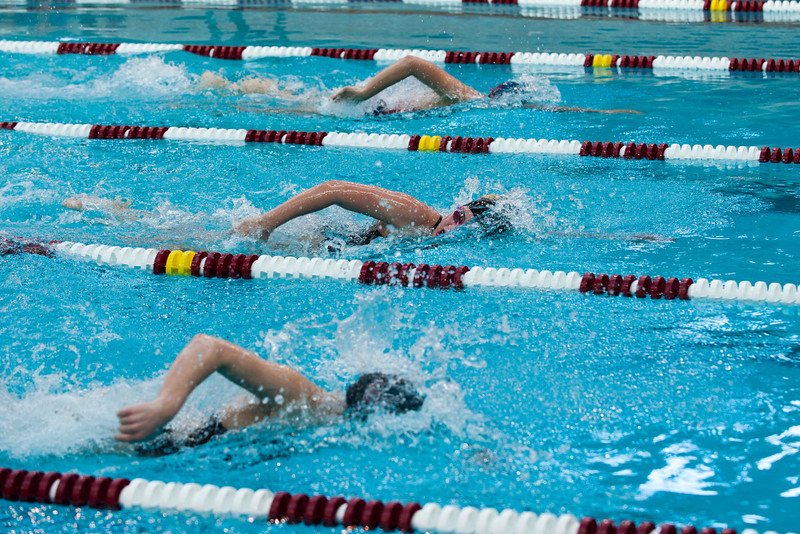 The North Allegheny Swimming and Diving teams waterlogged the host Seneca Valley Raiders on Thursday evening while sweeping first through third places in several events.  Both the NA Girls and Boys teams eclipsed the century mark with the Girls posting a score of 104 – 71 and sweeping five events on the night, while the Boys swept six events on the way to a 102 – 73 victory.

The Tiger Girls were led in the 200 Yard Freestyle by Junior Kayla Churman finishing in 2:01.83, Freshman Megan Christy, and Senior Abigail Rubio completing the 1-2-3 sweep.  Another dusting by the Girl Tigers came later in the 100 Yard Butterfly event where Junior Jacquelyn Du touched the wall first with a time of 1:00.90, followed by Junior Erin Kuhn, and Sophomore Christine Sun.  In the Girls 100 Yard Freestyle, Tiger Junior Charlie Brickner raced to a winning time of 56.20 seconds, and was followed by Sophomore Taylor McClellan, and Freshman Katie Davis.  In the following Girls event of the meet, the Tigers also swept the top three spots with Junior Morgan Soulia’s time of 5:13.33 out-touching Freshman teammate Lauren McGrath for first place, while Freshman Dani Torres came in third place.

The NA Boys kept up their side of the bargain with several strong performances throughout the evening’s competition.  The Tigers posted a 1-2-3 finish in the 200 Yard Freestyle when Senior Zachary Buerger swam a 1:44.28 to outpace his Tiger teammates, Junior Casey Melzer, and Sophomore Gage Halle.  Later in the meet, Buerger would again lead NA to an event sweep, this time in the Boys 500 Yard Freestyle when he touched first in 4:45.24, and was followed to the wall by Sophomore Daniel Songer, and Freshman Brett Edwards.

The North Allegheny Boys continued to apply pressure to the Raiders in other events like the 200 Yard Individual Medley which saw Junior Greg Arnold take first in 2:07.05, followed by Junior Jake Krivacs in second, and Freshman Eben Krigger in third place.  In the 50 Yard Freestyle sprint, NA Senior Josh Tonti won in a time of 23.86 seconds, with Freshman Stephen Wu, and Junior Peter Neal following in the second and third spots.  And just like the Tiger Girls, the Boys also swept the 100 Yard Butterfly event, led by Junior Max Staresinic with a time of 56.47 seconds, followed by Senior Sam Rutan in second, and Freshman Tom McCaffrey in third place.

The Tigers return to competition on Thursday, January 9 when they will host the neighboring WPIAL AAA Section 2 Hampton Talbots in a 6:00 PM competition at the NASH Pool.