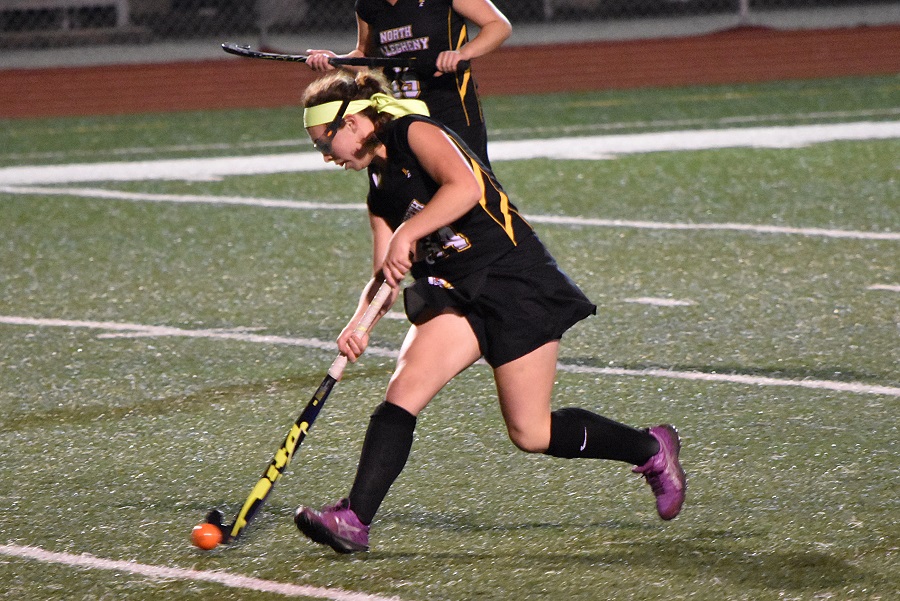 Tigers on Top in Battle of the Big Drive

North Allegheny Tigers Field Hockey defeated Hempfield Spartans in their final meeting of the year by a score of 4-0. The Greensburg, PA team, while showing much improvement over prior years, was still no match for the scrappy Tigers.

The Tigers team appeared jittery to start the first half and it took some time for them to settle into a groove. Mid-way through the half, the Tigers found their momentum. Working it up the left wing, freshman midfielder Bridget Russell smartly turned her body towards the circle and soundly pushed the ball to the opposite side. And, as the Yogism goes, it was “DéJá-Vu all over again” as senior Maddie Birmingham, similarly perched on the top of the right side of the circle last game, fired an identical rocket that blasted off of the boards past the Hempfield keeper for the first goal of the night at the 16:40 mark. The North Allegheny offensive line excellently pulled the defenders deep in the attacking zone all night; creating scoring opportunities at the pads, but also recognizing the space created at the top of the circle, where their midfielders lurked. Five minutes later, at the 21:35 mark, freshman forward Lexi McClure took advantage of this space as she dropped a nice pass where senior midfielder Jessie Serody exploded onto the ball, made one quick move right and scored with a serious drive that also ricocheted off the boards.   North Allegheny had started its engine, and was showing glimpses of the savvy team it can be. The players’ desire to keep the train on the track was especially evident in senior forward Maddy Snyder as she beat opponents to the ball all night. With just 45 seconds left in the half, Snyder crossed back to the top of the circle and found Serody, who discharged another powerful shot that found the net after a defender deflection. The half would end with the energized Tigers 3, Spartans 0. Penalty corners were 5 -0 Tigers and shots on goal were 8-1 Tigers.

The second half saw some end to end action thanks in part to intense 16 yard hits, particularly from Hempfield defender Madi Stoner (who also provided an excellent live rendition of the national anthem for the evening). Stoner’s power had Coach Madelyn Berkley backing up the North Allegheny team on the set play in order to give the players a better reaction time. Birmingham took one of these massive drives to the toe and was out for a good bit of the half. Coach shuffled positions again, as has been necessary this season, and the girls played on. At 23:22 junior forward Brooke Cameron got her stick on a loose ball in front, and knocked it home for the final tally of the night. Second half statistics saw North Allegheny 7 shots on goal and 0 penalty corners, and Hempfield 3 shots on goal and 1 penalty corner. The North Allegheny defense, led by senior Catie Kelly, did an admirable job stepping up on the sharply hit long balls. Due to the teams’ collective efforts, the Tiger goaltenders faced less pressure. NA recorded a combined 4 saves compared to the Spartan keeper, Taylor Ritson, who notched 11 saves.

The NA field hockey team can be seen in action at Newman Stadium on Monday, October 12 for Senior Night against Upper St. Clair at 7:30 pm, the final regular season home game.