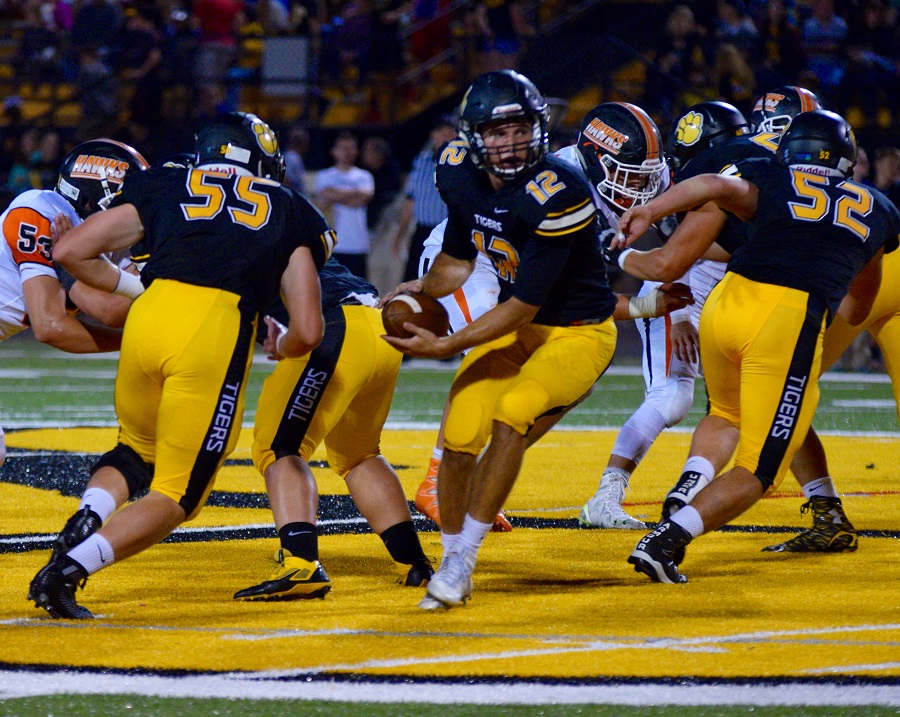 The North Allegheny Tigers played host to the Bethel Park Blackhawks in week 1 of the WPIAL high school football season.  The weather was absolutely perfect and the Tiger faithful were out in full force to see their new stadium renovations and their beloved football team.

The two teams more or less mirrored each other all game long but the Tigers proved to be one possession better on this evening.  In the first quarter the teams traded punts back and forth as both defenses were unyielding.  It looked as if Bethel Park was going to strike first as senior quarterback Cole Rogers would scramble for 56 yards to the NA 1 yard line but the play was negated by a holding call. Each team would commit a few untimely penalties and the first quarter would end scoreless.

The Tigers would come out hot in the second quarter when with 10:38 remaining in the first half Niko Mermigas broke the scoreless knot with a 65 yard touchdown run.  The kick by Namgyu Kang was good and the Tigers took the 7-0 lead.  As in the first quarter, Bethel Park would mirror the Tigers with a scoring drive of their own.  They drove 75 yards on 6 plays, capped by an 18 yard touchdown run by fullback Christian Frazier.  The conversion was good and the game was knotted again, this time at seven.  Not to be out done, the Tigers would put together an eight play 76 yard scoring drive to answer.  This time senior QB Ethan Maenza would connect with Mermigas for twenty four yards and the score.  The kick by Kang was good and the Tigers would go back on top 14-7 with 4:36 remaining in the first half.  Bethel Park would have a chance to answer before the half but the Tiger goal line defense held as the half expired.

Bethe Park had deferred the opening coin toss and received to start the second half.  Again the teams would trade punts however this time, NA punter Luke Trueman was met with resistance as the punt was blocked and the Blackhawks took over with great field position at the NA 25 yard line.  Three plays later Bethel Park’s Jeremy Lazzari punched it in from 2 yards out to tie the game at 14. On the ensuing kickoff Mermigas would give the Tigers good field position of their own by taking the return to the Bethel Park 44 yard line.  The majority of the work load on this drive was handled by senior running back Michael Pope.  He took it in to the end zone from 5 yards out scoring what would turn out to be the game winning touchdown with 3:43 to go in the 3rd quarter.  Pope had 17 carries for 60 yards to go with his touchdown.  The night however belonged to Mermigas as he did it in the air and on the ground by hauling in 4 receptions for 61 yards and a touchdown to go along with his 4 carries for 89 yard and a touchdown which merited him the honor of being the Wright Automotive Player of the Game.

The Tiger defense would come up big in the fourth quarter as they kept the door closed to seal the win for North Allegheny who improves to 1-1 on the year.  In all the Tigers tallied 3 sacks and the games only turnover with a fumble recovery.  The Tigers will take on Section Rival and top ranked Central Catholic next week at Carnegie Mellon, kickoff is set for 7:30pm.