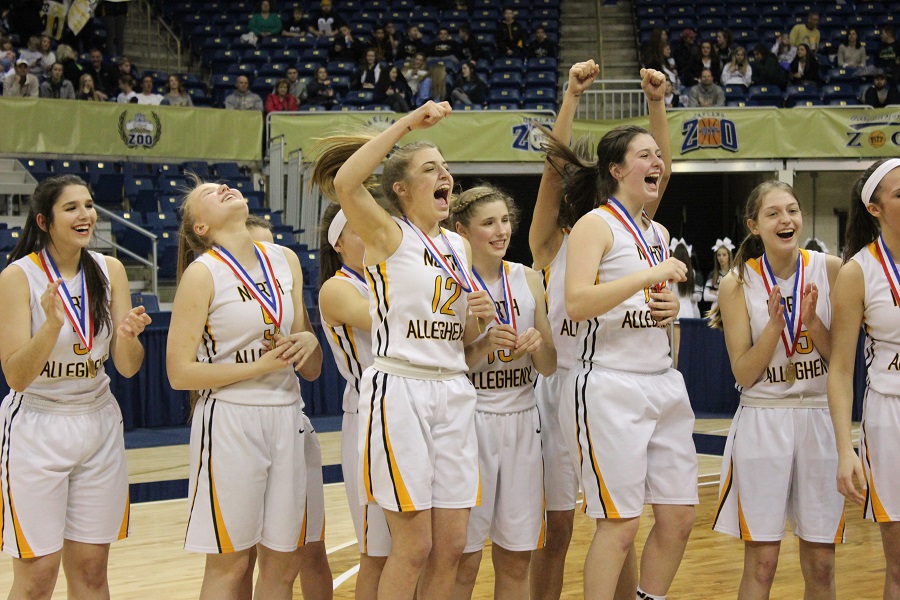 The North Allegheny Tigers became the first ever WPIAL Class 6A girls’ basketball champions with a 50-39 victory over the Bethel Park Black Hawks on Saturday night at the Petersen Events Center. Sophomore Rachel Martindale knocked down a 3-pointer to start the game and connected on six consecutive free throws to end it, helping NA capture its first WPIAL title in program history. Martindale totaled a game-high 23 points and was named the Wright Automotive Player of the Game by the North Allegheny Sports Network.

The top-seeded Tigers bombarded the seventh-seeded Black Hawks with a barrage of 3-pointers to take a 12-6 lead midway through the first quarter. Martindale, Brynn Serbin and Courtney Roman combined for four 3-pointers during the opening salvo. North Allegheny led by as much as eight points in the second quarter at 20-12, but Bethel Park trimmed the score to 22-19 with 1:35 left in the half thanks in large part to the perimeter shooting of Kamryn Lach. The Bethel Park junior guard poured in three 3-pointers in the half to keep the Black Hawks within striking distance.  Lach finished the game with four treys and 12 points. Despite BP’s late surge in the second quarter, Martindale buried one more 3-pointer before halftime to send the Tigers into the locker room with a 25-19 advantage.

In the second half, Bethel Park threatened the North Allegheny lead and came as close as 36-35 early in the fourth quarter on an Emma Papalia 3-pointer. Despite their best efforts, the Black Hawks could not overtake the Tigers and never led in the game. The Tigers ended the contest on a 14-4 run to pull away from the feisty Black Hawks and atone for a loss in the WPIAL title game to Norwin a season ago.

With the win, the Tigers’ 14th in a row, North Allegheny improves to 24-1 overall and will take on the Hempfield Spartans on Friday night in the first round of the PIAA playoffs. It’s the fourth consecutive year North Allegheny has won 24 games or more in a season and fifth straight season of 20 wins or more. Bethel Park dips to 19-7 on the season and will take on Penn Hills in the opening round of the state tournament.