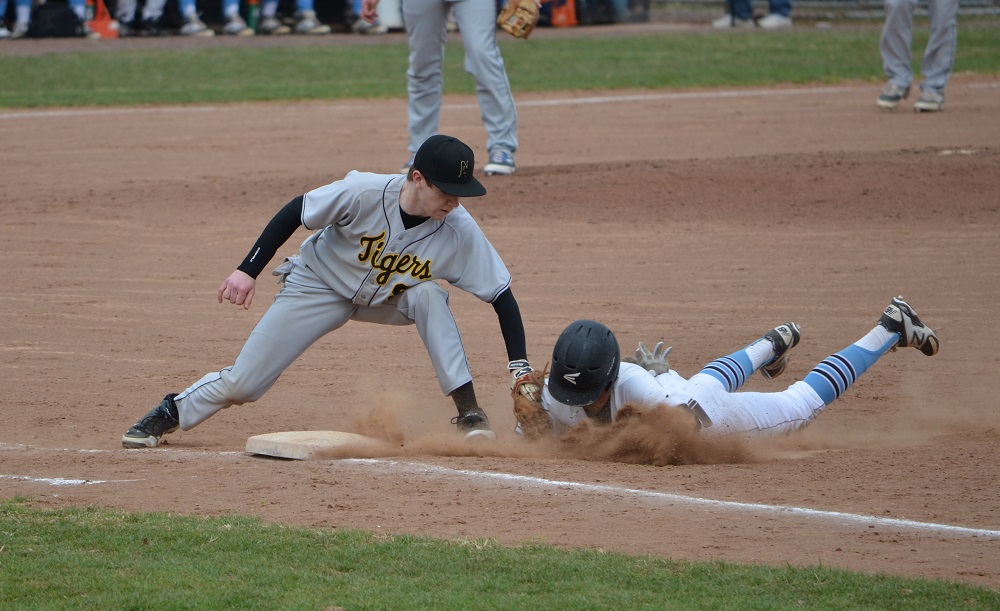 The last time North Allegheny played the Seneca Valley Raiders, the Tigers earned a thrilling 10 inning win in the quarterfinal round of the PIAA playoffs.  In their first meeting of 2014, these section foes needed extra frames again to determine a winner and once more North Allegheny came out on top with a 6-1 triumph in 12 innings.

Seneca Valley wasted little time before scoring the game’s first run as Vince Augustine drove home John Harper with a one-out RBI single in the bottom of the first. Later in the inning the Raiders loaded the bases with two-outs, but NA starter Mitch Machi limited the damage by inducing a fly out from John Davis for the third out and the score was 1-0, Raiders.

Seneca Valley starter Bryce Schnatterly rendered the Tigers hitless through four innings and scoreless through five, but NA finally got to the Raiders right-hander in the sixth.  Matt Muslin reached on a one-out double and was substituted for pinch runner Keegan Phillips.  Schnatterly struck out the next batter and then faced his mound opponent, Machi. With first base open, the Raiders elected to pitch to NA’s top hitter and Machi made them pay with an RBI double down the right-field line to tie the score, 1-1.

Relievers Matt Rafferty for Seneca Valley and Jon Dignazzio for North Allegheny were just as stingy as the starters as both tossed four innings of scoreless baseball heading into top of the 12th inning.

NA’s Nick Norwig led off the 12th with a walk and was advanced to second base on a sacrifice bunt by Garret Hagen. Luke Zahren smacked a single to left off of Rafferty that was misplayed by SV left-fielder Dan Barna. The error by Barna allowed Norwig to round third and score to give the Tigers a 2-1 lead. Josh Plichta kept the pressure on the Raiders with a walk and Muslin singled to load the bases for Dan Trettel.  The Tigers catcher blooped a single to right-field to score Zahren and the Tigers held a 3-1 lead.  An out later, Blake Young pulled a ground ball fair up the third base line for a two-out, two-run single to blow open the lead to 5-1, Tigers. Trettel’s courtesy runner, Joe Fitzgerald, scored later in the 12th on a balk for the inning’s final run and the Tigers took a 6-1 advantage.

The Raiders managed to load the bases against Dignazzio in the bottom of the 12th, but Seneca Valley ended the game the same way they started it, by leaving the bases loaded.  Dignazzio retired Corbin Kessler with a ground ball to third to end the ballgame and the Tigers claimed a five-run victory over their section rival.

North Allegheny improves to 4-2 overall and 2-1 in Section 1-AAAA.  Seneca Valley falls to 2-4 overall and 1-1 in section action. The Tigers continue section play tonight with a home meeting with the New Castle Red Hurricanes.  First pitch is slated for 7:00 pm.

To listen to an archived broadcast of NA’s win over Seneca Valley, click here.