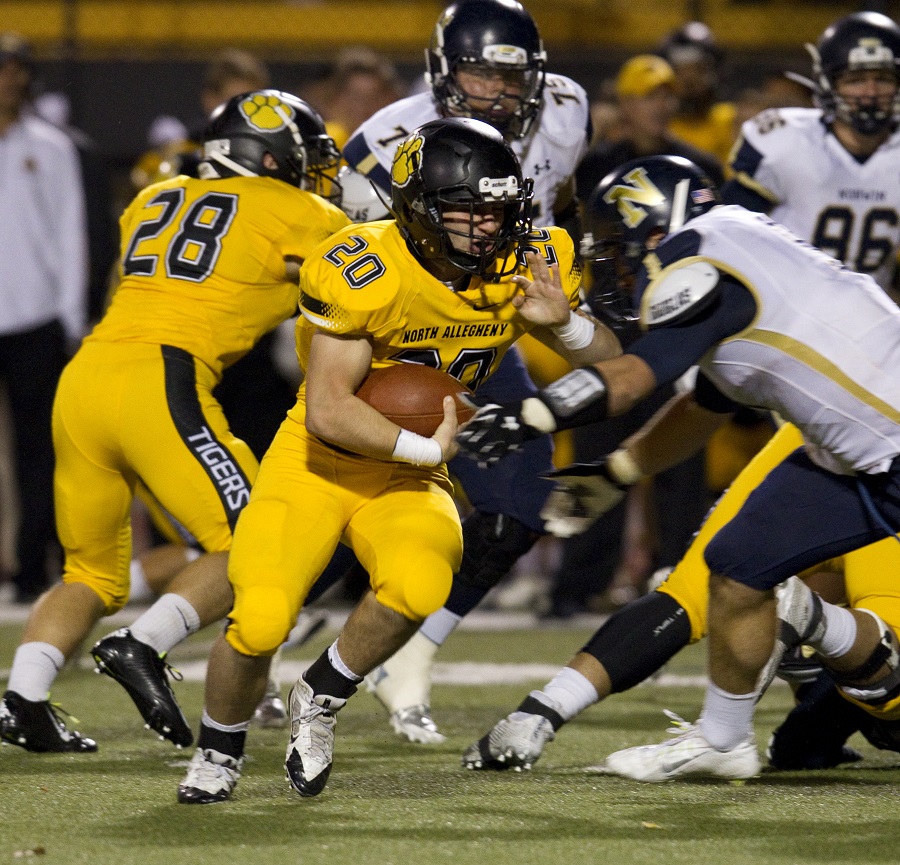 Six ball carriers scored touchdowns for North Allegheny as the Tigers routed the Norwin Knights in the opening round of the Class AAAA playoffs on Friday night, 56-17. Senior Ijhad Bonner, who has typically played tight end on offense and hadn’t carried the football all season, rushed for 93 yards and two touchdowns to spearhead North Allegheny to a 15-3 lead first quarter lead. For his efforts, Bonner was name the Wright Automotive Player of the Game.

The North Allegheny defense forced two turnovers in the second quarter, interceptions by Ethan Maenza and Riley Trueman, to short circuit two Norwin possessions. The NA offense converted those turnovers into touchdowns as Mike Pope rushed for a 3-yard score and Nick Provenzano plunged into the end zone for a 1-yard touchdown and a 28-3 lead with 3:52 to play before halftime.

Late in the second quarter, Norwin struck for a touchdown when quarterback Nick Amendola tossed a 21-yard scoring strike to Anthony DelleFemine to trim the NA lead to 28-10 with 1:11 remaining before halftime. The Knights offense totaled 382 yards of offense and received the football to start the second half. However, Norwin went three-and-out and punted away their last chance to get back into the ballgame. The Knights struggled on third downs, converting only 1 of 9 attempts.

Running on all cylinders, the Tigers offense expanded the lead with touchdown runs by Provenzano, Maenza and fullback Jake Longwell to give North Allegheny a 49-10 lead and invoke the mercy rule with 1:45 left in the third quarter.

Norwin running back Kyle Turcovsky, who rushed for 158 yards, broke loose for an 80-yard touchdown run to cut the score to 49-17, Tigers, late in the third quarter. North Allegheny capped the scoring with a 4-yard touchdown run by Alex Hays in the fourth quarter to bring the final score to 56-17.

Along with Turcovsky, Amendola also passed the century mark with 117 yards rushing. While the Tigers didn’t have a 100-yard rusher, they did have four players with 41 yards or more. Pope finished with 70 yards on seven carries, Maenza totaled 47 yards on six carries, and Provenzano ate up 41 yards on five carries. The Tigers rolled up 423 yards of offense with all but 18 yards coming on the ground. For look at total game stats, click here.

North Allegheny improves to 9-1 overall and advances to the WPIAL quarterfinals for a clash with the fifth-seeded Central Catholic Vikings next week. Norwin’s season ends with a 5-5 mark.