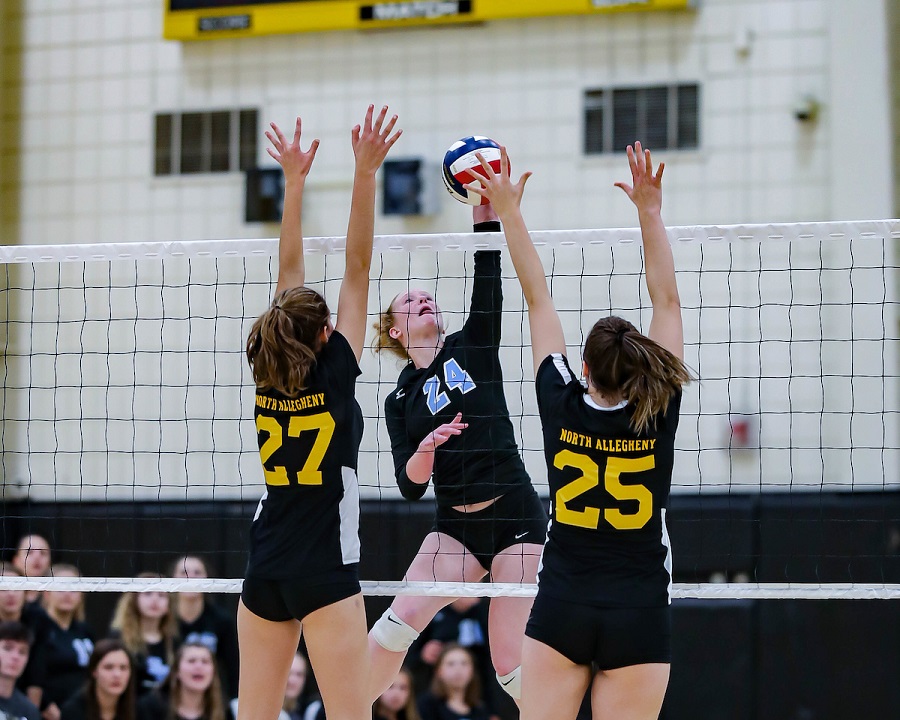 The North Allegheny girls’ volleyball team faced a familiar foe in the WPIAL Class AAAA quarterfinals on Monday night and earned a 3-1 victory over the Seneca Valley Raiders. The Tigers picked up the win over their section rival by set scores of 25-10, 25-16, 19-25 and 25-21.

Off to a fast start, North Allegheny controlled the first set and coasted to a 25-10 win. Junior Paige Miller posted three kills and an ace to aid the Tigers in their efforts. Freshman Caroline Curran tallied an ace to earn set point.

Senior Abby Miller helped spur on the Tigers toward a 25-16 win in the second set, posting three kills, a block and an ace.  On the night, Abby Miller finished with 16 assists, 13 digs, six kills and a pair of aces.

With their season on the line, the Raiders responded in the third set and were sparked by junior Sarah White and sophomore Emma Davis, who each tallied three kills. The set was tied 9-9 before Seneca Valley pulled away to win, 25-19, to force a fourth set. For the match, White belted out a team-high 11 kills for the Raiders.

White, along with the net presence of senior Bre Reynolds who provided numerous blocks, helped Seneca Valley take a 17-15 lead deep into set four. However, North Allegheny regained control and won 10 of the final 14 points to take the set, 25-21, and the match, 3-1.

North Allegheny improves to 17-0 overall on the season with their 64th consecutive victory. The Tigers will take on Moon on Wednesday night in the WPIAL semifinals at a site and time to be determined.