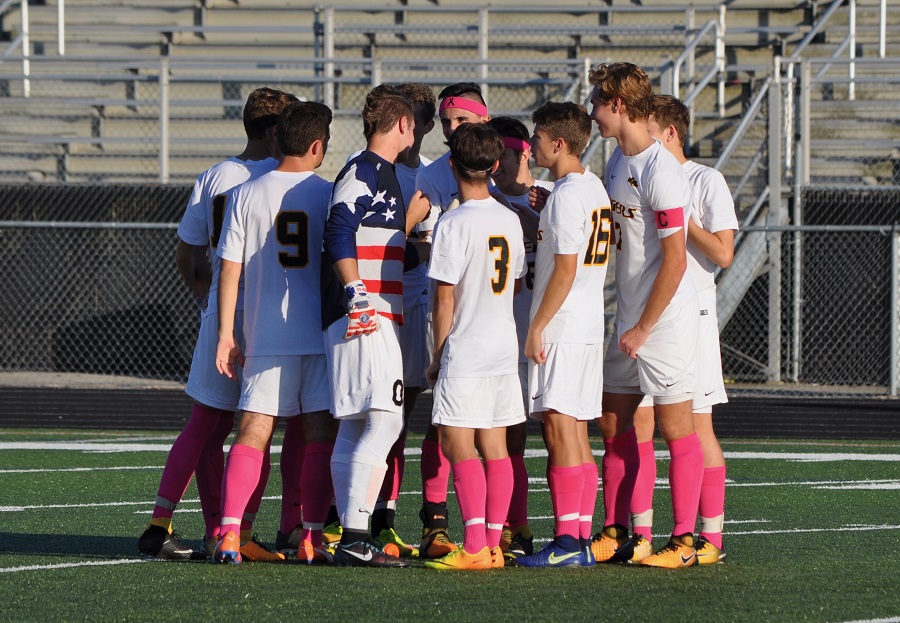 The North Allegheny boys’ soccer team went toe-to-toe with the Pine-Richland Rams for the third time this season in the first round of the PIAA Class AAAA playoffs. The result of Tuesday’s matchup at Fox Chapel High School was the same as the first two meetings as the Tigers again came away victorious, this time by a 5-0 decision. The win extended NA’s head-to-head unbeaten streak with the Rams to nine consecutive games.

Coming off a thrilling come-from-behind win over Peters Township in the WPIAL championship game last week, it was the title game hero who opened the scoring against the Rams as senior Cam Yurick scored with 20:57 remaining in the first half for a 1-0 lead. With time ticking down in the first half, Yurick provided a helper on a Josh Luchini goal with just 52 seconds to play for a 2-0 lead.

With Pine-Richland pressing for a goal in the second half and becoming more aggressive, the strategy opened up the field for a quick-footed and quick-striking North Allegheny team. With 17:55 remaining in the second half, senior Sean Atwater drove a hard shot that was initially saved by PR goalie Tom Fest. However, Fest allowed a rebound that was buried by Luchini for a 3-0 lead.

Luchini added another goal, his 35th of the season, with 8:02 remaining to improve the NA advantage to 4-0. Tallying a hat trick on the night, Luchini was named the Wright Automotive Player of the Game.

Not done yet, the Tigers wowed the crowd with one more highlight reel goal as Luchini passed to Nico Ramirez who deftly passed to Yurick who fired in a shot for his 17th goal of the season, and second of the night, to bring the score to its eventual final, 5-0.  Senior goalie Grant Glorioso was barely tested by the Rams and needed to make only one save to secure the shutout.

North Allegheny improves to 20-2-1 overall with the win. Pine-Richland’s season concludes with a record of 14-6-2. The Tigers will take on Peters Township on Saturday in the PIAA quarterfinals at a site and time to be determined.