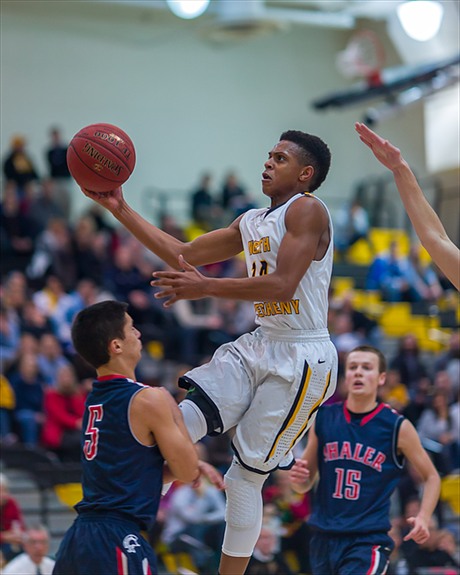 For the second straight night the North Allegheny boys’ basketball team surpassed the century mark as the Tigers trounced the Monessen Greyhounds on Tuesday night, 102-63, in the championship game of the Wright Automotive Holiday Tournament. Not since the 2010-11 season have the Tigers scored 100 points or more twice in the same season. Not in recent history have the Tigers achieved that mark in back-to-back games.

Monessen, a perennial contender in Class A, played confident and composed basketball in the first quarter and jumped out to a 12-5 lead. While the Greyhounds raced to a quick start, the Tigers pulled ahead for good thanks to a 20-3 run spanning from the end of the first to the beginning of the second quarter.  The Tigers 39-point outburst in the second quarter effectively put the game away by halftime. Foul trouble was another detriment to the Monessen cause as the Greyhounds totaled 11 personal fouls in the first half alone.

Senior Cole Constantino led the charge for the Tigers with 22 first half points and totaled 32 for the night. Including Constantino, five NA players reached double digits as the Tigers’ torrid shooting turned the game into a laugher. Senior Will Sandherr tallied 14 points, Curtis Aiken and Griffin Sestili netted 13 apiece, and Keegan Phillips added 12 points. NA shot 57 percent from the field and outrebounded the Greyhounds, 39-22.

Along with winning the first place trophy at the annual holiday tournament, three Tigers were named to the All-Tournament Team.  Constantino, Phillips and Sandherr received All-Tournament laurels. Scoring a game-high 32 points, Constantino was also named the Wright Automotive Player of the Game by the North Allegheny Sports Network.

For Monessen, Justice Rice and Lavelle Rush finished with 14 points each.  Both were pivotal in the early surge by the Greyhounds in the first quarter.  Rice was named to the All-Tournament Team for his excellent play.

North Allegheny sits at 10-0 overall and will return to section play on January 6 when the Tigers visit the Central Catholic Vikings.  Monessen falls to 5-4 with the loss and will visit New Castle on January 3.