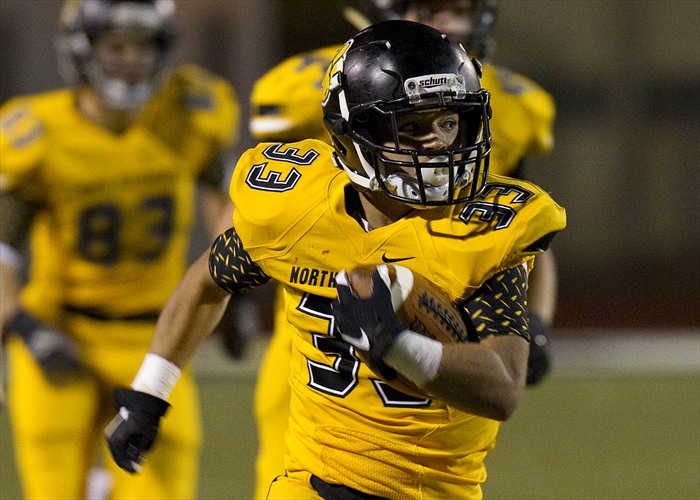 Tigers Ready For Rumble With Spartans

Winners of five in a row, the North Allegheny Tigers (6-2) look to extend their winning streak tonight with a non-conference visit to Westmoreland County to face the Hempfield Spartans (4-4). The Tigers are coming off an impressive 49-14 demolition of the Seneca Valley Raiders last week. Hempfield has lost four of its last five games, including a 55-37 defeat at Penn Hills last Friday.

The Spartans have been a bit of an enigma in 2016, opening the year with a 3-0 record. During the early hot streak, Hempfield earned an impressive 41-38 victory over Mt. Lebanon. While it’s been a roller coaster ride for the Spartans thus far, one thing that has been consistent is an offense that averages 28 points per game. Strong up the middle, Hempfield has a Division I recruit at center in Bussy Remaley, a 1,500-yard passer in junior Justin Sliwoski and the leading rusher in Class 6-A in senior tailback Jordan Kempka. A workhorse in the running game, Kempka has posted back-to-back 200-yard games entering tonight’s contest with North Allegheny. For the season, Kempka has rushed for 1,150 yards and five touchdowns.

The defense has been an area of concern for the Spartans, a unit that has allowed 38 points or more to an opponent five times this season. The Tigers will hope to capitalize on that with an offense that averages 33 points per game. Senior quarterback Ethan Maenza has rushed for 817 yards and 14 touchdowns, while throwing for 741 yards and seven scores. Senior Mike Pope, who rushed for 147 yards and two touchdowns last week against Seneca Valley, has 471 yards on the campaign and six total touchdowns. The top receiver for the Tigers is Niko Mermigas with 28 receptions, 526 yards and four touchdowns.

The North Allegheny defensive unit is anchored by linebacker Ryan Langdon who has posted 39 tackles, four sacks and one interception return for a touchdown. Along with Langdon, Carlos Blanco is tied for the team lead in sacks with four. Mermigas has a team-high 44 tackles and two interceptions from his defensive back position.  The NA defense has allowed an average of 20 points per game.

The last time North Allegheny faced Hempfield was in the first round of the 2007 playoffs, a game the Tigers won 35-7. NA quarterback Geoff Greco totaled 142 yards rushing and two touchdowns in the win. Running back Karl DiCiantis racked up 145 yards and two touchdowns.

Tonight’s meeting between North Allegheny and Hempfield will kickoff at 7:00. The pregame show on the North Allegheny Sports Network begins at 6:40 and includes a pregame interview with Tigers head coach Art Walker. To listen to tonight’s broadcast, click here.