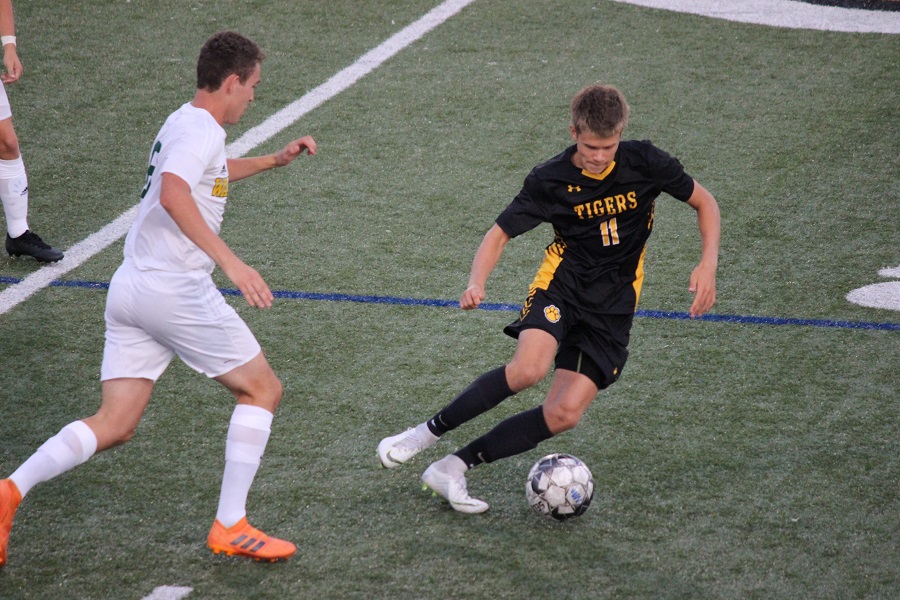 The stands were a little more crowded on a warm Saturday evening where the North Allegheny Boys Soccer program recognized their Middle School and Freshman teams on the field at halftime.  The varsity team was primed to entertain the fans as they netted eight total goals during an 8-2 non-section victory over the Penn-Trafford Warriors.

Penn Trafford scored first when junior forward Logan Hummert got a cleanly struck header on a cross from the right that found its way past junior goalkeeper Mikkel Hindsbo within the first two minutes of the game.   That goal was matched midway through the half as senior midfielder Andrew Solman delivered a rocket strike from 20’ out that was too hot for the goalie to handle, bouncing directly to junior forward/defender Jacob Gardner who promptly finished the chance with his first goal of the season.  Shortly after, NA surged with some fancy footwork by junior forward Phillip Iozzi, who delivered a strong left-footed cross from the right side that found junior Kensley Owens who promptly volleyed the ball past the goalie putting the Tigers up, 2-1.  With 11:28 remaining in the half, PT junior midfielder Joe Whipkey finished a rebound off Hindsbo’s outstretched hands knotting the game up at 2 goals apiece.  Despite several quality chances delivered by some stealthy offensive opportunities by Solmon, Owens, Iozzi and junior midfielder Will Stasko, the score remained tied 2-2at the half.

In the NA huddle at the start of the second half, the team challenged themselves to score within the first minute.  Senior midfielder Matt Van Kirk (MVK) decided a minute was too long.  Following a brilliant sequence by senior defender Samuel Giannetti, dicing around two PT defenders and delivering a perfect pass that MVK pushed past the goalie, precisely 32 seconds into the half for a 3-2 lead.  Another two minutes later, MVK struck a left-footed laser from 15’ out, giving him his second goal of the match and NA a 4-2 advantage.  The fifth goal came when senior defender Jonathan Ross lofted a perfectly placed direct free from the 40’ where sophomore forward Evan Anderson finished in tight for a 5-2 lead.  Anderson netted his second of the match, deflecting a well-lofted cross from the left by senior Bryce Boroughs, past the PT goalkeeper, making the score 6-2, NA.  Scoring wrapped with a pair of beautiful header goals, one each by Owens, his second of the match, and senior forward Sam Maldia.

North Allegheny had the edge on Penn-Trafford for both shots on goal (16-3) and corner kicks (8-1).  The Tigers improve to 3-1 and will host the Central Catholic Vikings at 8:00 PM this Tuesday. The game will be broadcast live via the internet on the North Allegheny Sports Network.