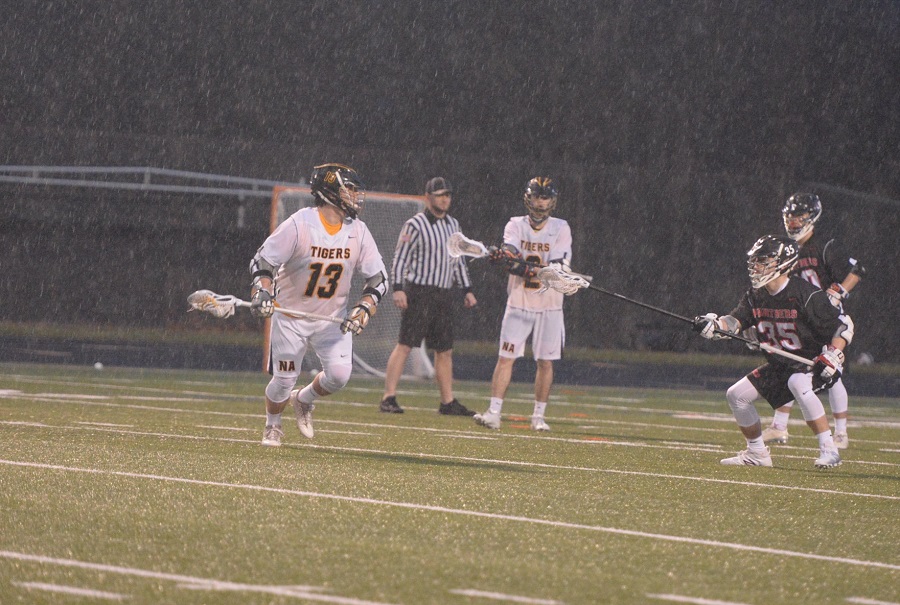 On a rainy night at Newman Stadium, the North Allegheny Tigers poured on the goals in a 14-3 win over the Upper St. Clair Panthers on Thursday night. Five different Tigers scored goals in the non-section win, including Wes Powell and Kyler Byerly who paced NA with four goals each.

The offensive outburst began immediately as the Tigers exploded for a 6-0 lead in the first quarter. Junior Matt Osten scored three goals during the first-period surge and was named the Wright Automotive Player of the Game by the North Allegheny Sports Network.

Powell, Byerly and Ryan Leonard also netted first-quarter goals for the early six-goal advantage.  North Allegheny’s sixth goal by Leonard came on a 2-on-1 break served up on a beautiful pass by Nick Kairys.

From that point, the rout was on. North Allegheny danced through the rain drops for a convincing victory and invoked the mercy rule in the fourth quarter. Sophomore Tyler Lamark joined in the offensive onslaught with two goals.

North Allegheny improves to 1-2 overall with the non-section triumph. Upper St. Clair slips to 1-1 on the young season. The Tigers will host Seneca Valley on Wednesday night at 7:30 p.m. The game will be broadcast live via the internet on the North Allegheny Sports Network.