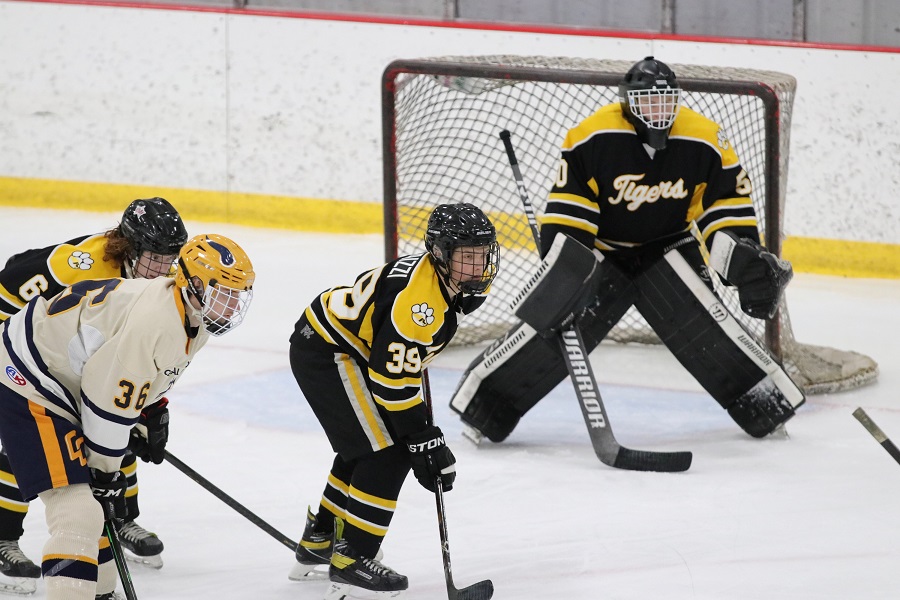 After dropping their first game of the season earlier in the week, the North Allegheny Tigers took out their frustration on the Central Catholic Vikings with a 10-2 blowout victory. Junior defenseman Trey Gallo led the offensive outburst with a hat trick and junior forward Matt Irvin had a four-point night with four assists. The win vaults North Allegheny back into sole possession of first place atop the Class AAA standings.

It was an auspicious start for the host Vikings at the Alpha Ice Complex as Mike Huwar scored just 56 seconds into the game for a 1-0 lead. The Tigers answered back with goals by Kyle Holmes and Gallo to pull NA ahead, 2-1, with 3:49 to play in the first period. Central Catholic’s Beckam Alger netted a power play goal before the end of the period to tie the game at 2-2.

While the first period was tightly contested, the rest of the game was not. North Allegheny took the lead on a power play goal by Gallo at the 7:16 mark of the second period for a 3-2 advantage. The Tigers took a stranglehold of the game from there with additional markers Luke Washabaugh and Lorenzo Colaizzi, and one more from Gallo, for a 6-2 lead after two periods.

In the third period, Patrick Buttignol, Shane O’Neill, Nolan Colinear and Colaizzi all tallied goals to close out a 10-2 triumph.

Junior Rylan Murphy got the start in net and made 17 saves to earn the victory. Central Catholic’s Patrick Lettieri made 36 saves in a losing effort.

With the win, North Allegheny improves to 6-1-0 on the season, while Central Catholic falls to 3-3-0 on the campaign. The Tigers will host Upper St. Clair on Thursday, Nov. 11 at 9:10 p.m. The game will be broadcast live by the North Allegheny Sports Network.