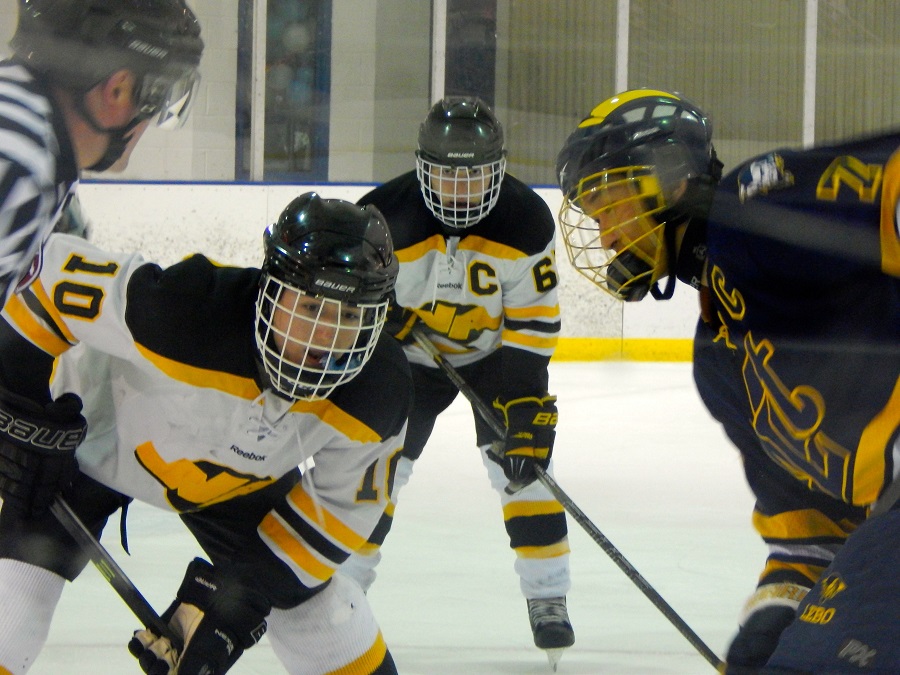 The North Allegheny Ice Hockey Team skated to a 2-2 tie with the Mt. Lebanon Blue Devils on Tuesday night at the BladeRunners in Warrendale.  The Tigers outshot the Blue Devils 34-24 and grabbed a 2-0 lead in the second period.  However, Mt. Lebanon rallied to tie the game and force overtime as the game ended in a stalemate.

After a scoreless first period, North Allegheny opened things up early in the second period with a marker by Dominic Zangaro to give the Tigers a 1-0 lead.  At the 12:26 mark of the period, NA added onto their advantage when Cameron Fisher beat Mt. Lebanon goalie Joel Kirshner for a goal to make it 2-0, Tigers.  A tripping penalty on the Tigers late in the period opened the door for Mt. Lebanon as the Blue Devils’ Reed Farber scored on the power play with under two minutes to go in the second to cut the NA lead to 2-1.

In the third period, the Blue Devils found the equalizer with a tally by George Farrell that evened things up at 2-2 with 5:26 to play. Neither team could muster a game winner in the extra period. North Allegheny’s Bradford Thornburgh stopped 22 of 24 shots on net while Kirshner made 32 saves on the night.

Despite the tie, North Allegheny remains in first place in Section 2 with a 4-2-1 record.  Mt. Lebanon stays in third place in the section, sitting at 3-3-1.  The Tigers will visit Upper St. Clair on Thursday, December 12 at 8:40 pm at the Ice Castle in Castle Shannon.