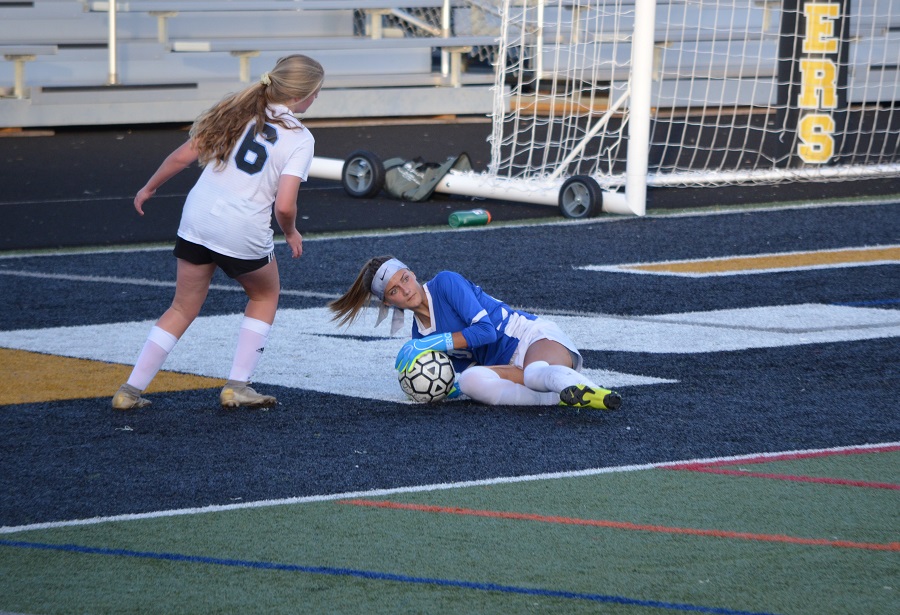 Facing the reigning WPIAL Class AAAA champions at Newman Stadium on Tuesday night, the North Allegheny girls’ soccer team smothered the Seneca Valley Raiders for a 1-0 shutout and Section 1 victory. Junior goalie Madison Vukas made six saves and posted her third shutout on the young season. For her play in net, Vukas was named the Wright Automotive Player of the Game by the North Allegheny Sports Network.

Vukas made her presence felt early in the contest with a pair of key saves. With just under 20 minutes to play in the first half, Mia Zec put a header on net that was denied by Vukas. Five minutes later, Seneca Valley’s Natalie Mathews raced in between two NA defenders but was thwarted on a sprawling save by Vukas that kept the game scoreless.

The Raiders had their own outstanding goalie in net in the form of Gannon University commit, Morgan Sinan, who made seven saves on the night. However, the one shot that Sinan did not stop came with 13:29 remaining in the first half courtesy of NA freshman Lucia Wells. The Wells goal, her third of the season, gave the Tigers a 1-0 lead. Of her three goals this season, all of them have been game-winners.

Vukas and the NA defense made sure the lone goal by Wells stood up. Seneca Valley’s best chance to tie the occurred with 12 minutes remaining in the second half but senior defenseman Sophia Spano stepped up and blocked a point-blank shot attempt from Norah Seibel to preserve the Tigers lead.

The outcome improves North Allegheny’s record to 4-1 overall and 3-0 in Section 1-AAAA. Seneca Valley slips to 3-2 overall and 2-2 in the section. The Tigers will visit Upper St. Clair on Saturday at 6:30 p.m. for a non-section battle.