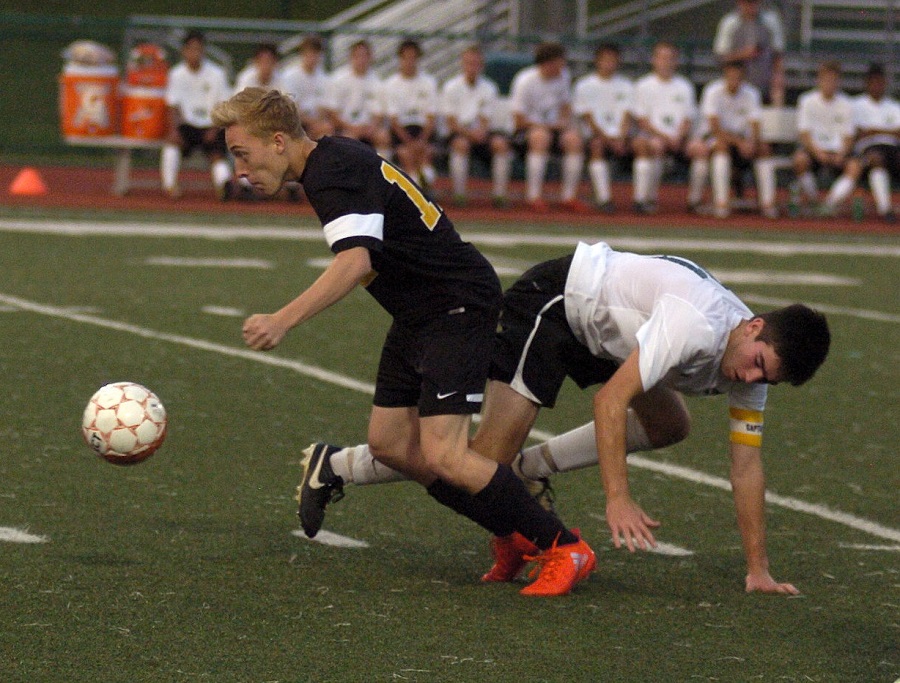 The North Allegheny boys’ soccer team continued its early season success on Saturday night with a road win over section rival Pine-Richland, 2-0. Both North Allegheny and Pine-Richland didn’t string many offensive chances together in the first half but NA goalie Grant Glorioso made a stellar save at 19:05 from ten yards out on the only Rams shot of the half while the Tigers had one long shot on goal along with Zach Marzula’s close range shot that went wide.

In the second half, Pine-Richland continued to have offensive troubles, being held to only two weak shots on goal, and at 19:20, hitting the cross bar when a forward got behind the defense.  At 18:18 Cam Yurick found Ben Cinker with a perfectly paced through ball down the middle of the field that Cinker hit with his left foot past the Ram keeper giving the Tigers a 1-0 lead.  Seconds later though at 18:00, a Pine-Richland forward had a breakaway on goal but junior defenseman Ethan Schenk made a terrific play to tackle the ball away before he could get a shot on goal.

Alex Goto led an offensive charge at 10:26, but his shot was blocked and the rebound fell to Cinker who tallied his second goal of the night, and team-leading sixth goal of the season, giving NA a 2-0 advantage. The Tigers made the most of their three shots in the second half, scoring two goals for the victory.

With the win the Tigers stay in a first place tie in the section with  a 2-0-1 record along with a 5-0-2 unbeaten string for the season.  Next up are the Butler Tornado in a 7:00 p.m. contest on Tuesday.