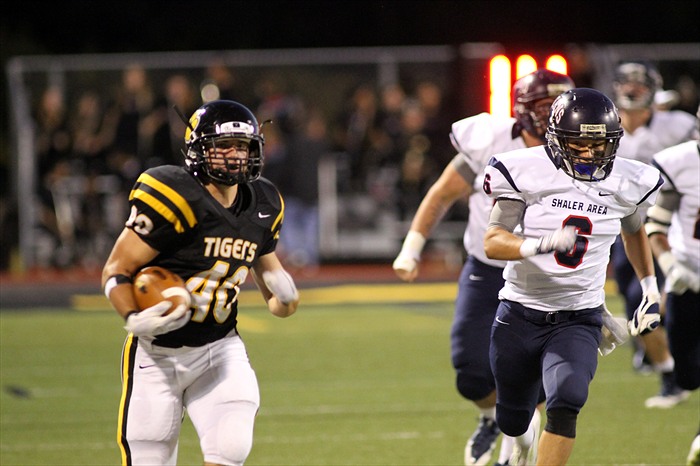 The sky was clear and the temperature was perfect at Newman Stadium on this September evening and the Tigers were near perfect as well. It seemed that everything North Allegheny did worked this evening and they were firing on all cylinders as a total team.  So much so that seven different Tigers found the end zone in this contest.

North Allegheny wasted no time scoring this evening and did so six times in the first half alone. On the opening drive of the game the Tigers went 71 yards on 5 plays in only a minute and 34 seconds. Josh Bergman capped the drive with a 10 yard run and the Tigers were off to the 7-0 lead.  On the next NA possession again the offense executed swiftly this time using only a minute and twenty two seconds off of the game clock. It took only 4 plays to go 66 yards for the score. This time it was Michael Pope who burst through the hole and sprinted 51 yards for the NA touchdown.  Leading 14-0 the stingy Tiger defense quickly got off the field and before the first quarter was over the Tigers would drive again.  This time it would take 5 plays to go 42 yards.  Jeff Clemens found Eric Sprys open and delivered a 29 yard touchdown pass. With under a minute to go in the first quarter the Tigers were up 21-0.

In the second quarter North Allegheny would continue to put together well executed offensive series’ and never look back.  The next NA would go 78 yards in 6 plays.  Bergman again found himself in the end zone only this time it was a 9 yard reception. Clemens made an excellent off balance throw after eluding the pressure of the defensive end and jumping on the release of the perfect pass to put the Tigers ahead 28-0.  Shaler would put together a drive of their own into the Tiger red zone but their field goal attempt would be blocked and returned 97 yards by Ethan Maenza for the score.  Seth Mancuso would hit his 5th straight extra point conversion and the Tigers would have a 35-0 lead with 2:31 remaining in the first half.  With the mercy rule looming the Titans were unable to keep the Tiger offense off of the field one more time before the half and the Tigers would score yet again.  This time Clemens would find Matt Sell open with a 25 yard pass. It was a two play drive, the other being a 39 yard throw back screen to Nick Provenzano that set up the score.  The extra point would be blocked and North Allegheny would head to the locker room with a 41-0 half time lead.

The second half by rule was played with a running clock as the mercy rule had taken effect.  Coach Walker had seen enough out of his starters and deployed the future of the program.  Pretty much playing against the starters of Shaler the younger version of the Tigers held their own with the Titans matching them score for score to finish the game.  Touchdowns were added by NA’s Cory Cavanaugh with a 10 yard run and Charlie Groom who scampered 40 yards for the score.  Ben Cinker would convert his two extra point attempts and handle the kicking duties for the remainder of the night.  Shaler scored on a 1 yard run by Anthony Zelina and a 15 yard pass from Nick Fugh to Devin Spagnola. NA defeated Shaler by a final score of 55-14. Jeff Clemens finished the night completing 7 of 11 passes for 140 yards and 3 touchdowns which was good enough to earn him the Wright Automotive Player of the Game. Shaler falls to 0-5 on the season while NA improves to 3-2 overall and 2-2 in Northern Eight Conference play. The Tigers will look to continue their success in conference play when they travel to Butler to face the 2-3 (1-2) Golden Tornado on October 3rd in a contest sure to have playoff implications. Kickoff is set for 7:30pm.