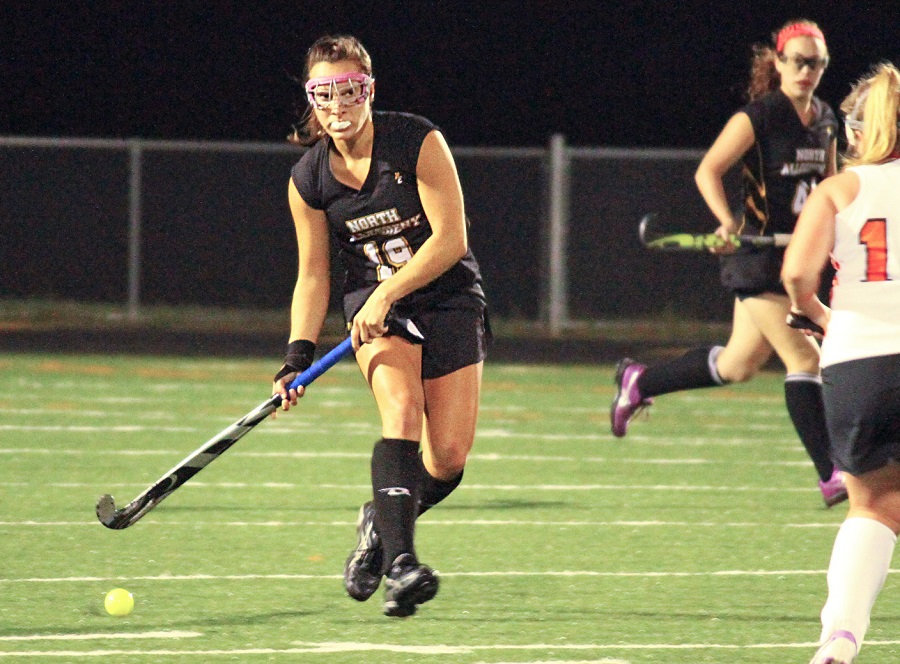 The Lady Tigers continued their winning ways on Tuesday, beating the Wildcats 7-0 on brand new Rossi Field at Latrobe High School’s Memorial Stadium. As has been the standard for much of the Tigers season, six of the seven goals were tallied by different players. The Tigers set the tone of the game by scoring just three minutes in, after being awarded a penalty corner.  Senior midfielder Hannah Downing took a hard shot that was blocked by Latrobe’s goaltender.  Downing picked up the rebound and passed to fellow midfielder Nicole Burns, who unloaded a stinging shot to take a 1-0 lead.  The rock-solid Tigers midfield would help keep the play mostly in the Latrobe end, where the Tigers managed a total of 22 shots on goal, though it would be 10 minutes before the Tigers would score again.  The second goal came from junior forward Maddy Snyder who poked in a shot from just in front of the net, following passes from several teammates and a final push pass from senior Jessica Brandon who registered the assist.  With eight minutes remaining in the half, senior forward Kailey Vogl intercepted a failed Wildcat pass on a 16-yard hit, and her quick pass set up Brandon, who connected on a bouncing shot from the right side to put the Tigers ahead, 3-0.  The Tigers would finish off the half with two more goals in the last three minutes.  The first began with a pass from Brandon to Downing, who lifted an aerial shot over the goaltender, that hit the cross bar and dropped near the goal line, where sophomore forward Erin Coran, was able to push the ball into the net.  The second was an unassisted slap shot from senior Megan Guzzardi from the top of the circle.  The half would end with the Tigers up 5-0.

Though Latrobe was unable to amount more than a few scoring chances, they were awarded three penalty corners in the second half, while the Tiger defense held them to only one shot on goal. Sophomore goaltender Katie Shideler registered the save.  The Tigers had a strong passing game, often keeping the ball away from their opponents and cutting off Wildcat passes.  On one such instance, the Wildcats were inserting an out-of-bounds ball that was intercepted by the Tigers and quickly moved across the field to Downing.  On the receiving end of Downing’s swift, ensuing pass, was Guzzardi, and she hammered a shot that bounced beyond the Latrobe netminder for her second goal on the night.  The final Tiger goal would come with 10 minutes left to play, when the Tigers were awarded a penalty corner.  Junior Catie Kelly would insert the ball which was then played by sophomore Lily DeNoma, who scooted it forward to junior Jessie Serody.  Serody took a shot that was blocked by a Wildcat defender and picked up by Kelly who pushed the ball into the net.  NA displayed numerous examples of such teamwork and a sharp passing game that helped them maintain a considerable share of possession throughout the match.  The Tigers also created offensive chances by following their shots and picking up rebounds.  With the win, the Tigers improve their overall record to 6-1 and their section record to 4-0.  The Tigers have zero goals against in section play.

The Tigers face another Wildcat team on Friday, when they travel to Mt. Lebanon for a varsity-only contest against visiting team, Novi, from Michigan. Game time is 6:00 pm. The Tigers varsity team also hosts Hudson at 10:30 am on Saturday at Newman Stadium.