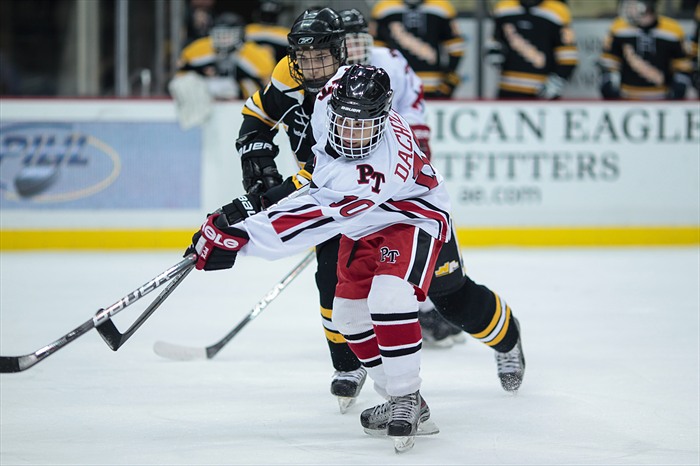 Sam Barnes scored two third period goals to lead the Peters Township Indians past the North Allegheny Tigers, 3-0, at the BladeRunners in Warrendale.  The two stingiest defenses and goaltenders in Class AAA battled it out on Tuesday night and were locked in a scoreless tie after two periods of play.  The Indians had the better of the scoring chances and outshot the Tigers 28-14 in the first 34 minutes of play.  Thanks in large part to the play of goalie Bradford Thornburgh, North Allegheny was very much in the game entering the third.

Early in the third period, it appeared the Tigers might strike first as NA blocked a Peters shot at the blue line and turned it into a 2-on-1 in the Indians end.  Freshman Dawson Richard put on a beautiful deke move on PT goalie Brian Baker but his backhand attempt from just feet away hit the side of the cage and the game stayed tied, 0-0.

Not long after the near miss by Richard, the Indians turned the tide and scored on Barnes’ first goal at the 3:47 mark of the period to take a 1-0 lead. Less than two minutes later, Adam Alavi fed Jonathan Dagnal for a marker and a 2-0 advantage.  Despite the Tigers best efforts, Peters Township put the game away on an empty net goal by Barnes in the waning seconds to bring the final score to 3-0, Indians.

For the game, Peters Township outshot the Tigers 40-20.  While the Tigers were blanked by Baker, the Class AAA leader in save percentage, North Allegheny still had admirable performances, one of which came from NA forward Marty Hubert. The senior was a spark plug for the Tigers and Hubert also provided a solid fore check to stall Peters Township’s trips up ice.  For his efforts, Hubert was named the Wright Automotive Player of the Game.

The loss drops North Allegheny to 9-5-1 and second place in Section 2-AAA. Peters Township earns its sixth straight win and improves to 15-2-1, the best record in Class AAA. The Tigers will return to action on Friday night with a meeting with the Penn-Trafford Warriors.  Face off is slated for 7:20 pm from BladeRunners in Warrendale.