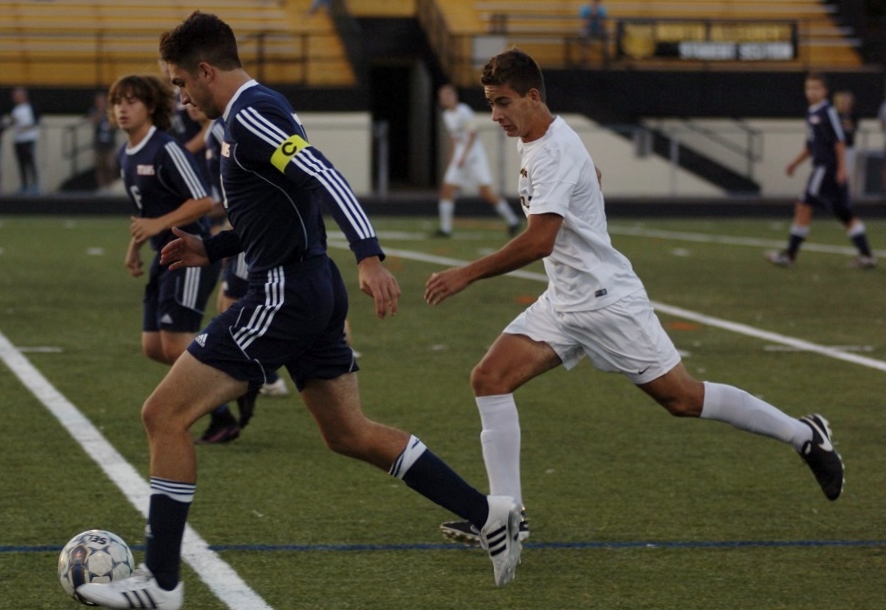 North Allegheny maintained its undefeated status and captured its first section win of the season with a 5-1 pasting of the Shaler Titans on Thursday night. The Tigers were led by senior forward Ben Cinker who posted a hat trick in the one-sided victory.

The beginning ten minutes of the game saw six corners, three by each team, until a Shaler forward got around the Tiger defense and had a shot off the crossbar from close range at 30:30.  NA substitutions at 21:45 changed the dynamic of the game as Cam Yurick crossed to Cinker in front for a close range header that was denied by the Shaler goalie. Then a shot by Shaler was saved from ten yards out by Grant Glorioso keeping the game scoreless.  At 6:12 Yurick stole a clearing pass and fed Cinker who beat the Titan goalie from 15 yards out giving the Tigers a 1-0 lead.  Mike Morrissey got into the offensive act at 132 with a cross to Cinker who scored again to give North Allegheny a 2-0 halftime advantage.  The Tigers enjoyed a 6-2 advantage in shots on goal and corners for the half.

Cinker almost got his third goal at 37:20 off a perfectly placed through ball from Nathan Muckle, but was denied by the Shaler goalie. The ball kept on finding Cinker and at 28:54 off  a clearing he found the ball and buried it for a hat trick and a 3-0 NA  lead. The Tigers continued their suffocating team effort all night with special notice to Alex Goto  who seemed to be everywhere on offense and defense. The NA squad continued their pressure and at 5:29 a cross from Roman Rainville found that James Nolan in front who directed it past the Titan keeper for a 4-0 advantage. Unfortunately the shutout was broken at 1:47 as a Shaler midfielder came up on the play and scored.  The Tigers weren’t done though as Nick Williams scored his first of the year off a well-placed corner from Rainville in front of the net and his header found the back of the twine leaving the NA squad with a 5-1 well-played victory.

With the win the undefeated Tigers improve to 4-0-2 overall and 1-0-1 in the section.  The schedule doesn’t get any easier as they travel this  Saturday to play Pine-Richland at 7 p.m. in what should be another important early season contest.