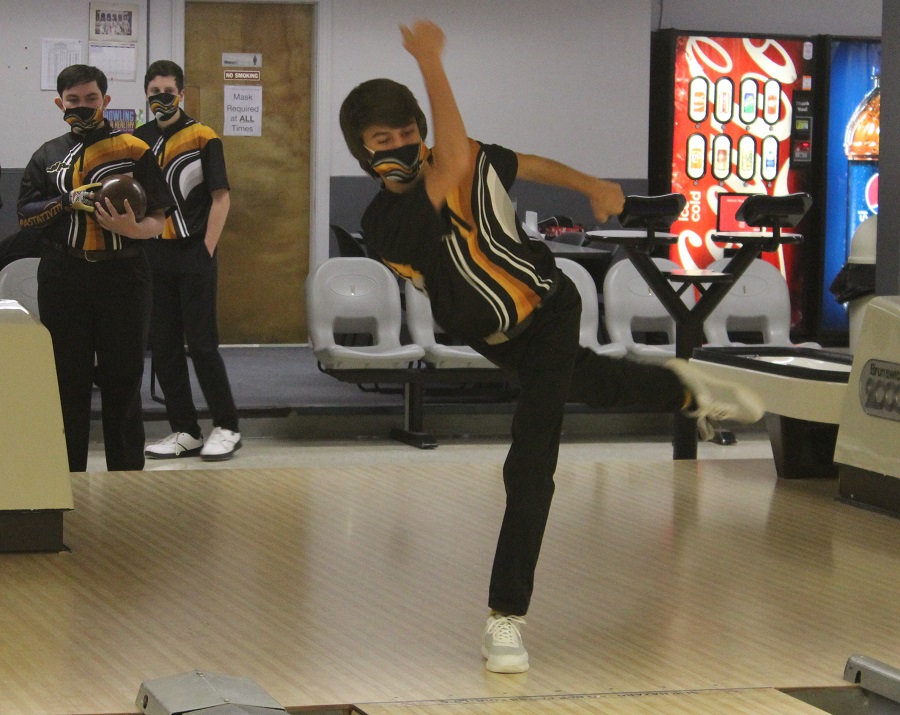 Tigers Survive Tornado Alley; Return as Kings of the North

Bumped and bruised, the NA Tigers returned home to McCandless last night, as the sole survivors of Tornado Alley.  Every other team in the WPIBL North has traveled to Butler to take on the perennial powerhouse and has come back defeated.  North Allegheny entered the competition with a match record of 8-0 and a game record of 24-0.

Family Bowl-A-Way has always provided an unpredictable venue for this match between section rivals.  The Tigers started game 1 slow as the lane conditions were menacing and challenged even the most seasoned of players.  NA had fallen behind Butler, becoming the all too familiar, storm chaser.  Midway through the opening game, the Tigers finally hit their stride and settled into a good rhythm.  Leading the Tigers was junior Marc Sostmann.  His 4-bagger in frames 5-8 provided the spark that NA needed.  Junior Jeb Jorden and senior Andrew Cook each quickly added double strikes.  Game 1 came down to the 10th frame.  Cook added another strike and senior Dylan Scheidler finished with a turkey.  The streak of Tigers barely outran the Butler Golden Tornadoes, but it was a team win with Game 1 going to the Tigers, 904-883.

Butler once again took control of game 2 as the Tigers tried to get their bearings after the lane switch. Jorden and Scheidler tried to combat the Tornadoes with each boy throwing a turkey midway through the second game.  But the winds of chance seemed to favor the Tornadoes as they were able to have more pins topple over.  An unfortunate split in the 10th frame, halted any chances of the Tigers recovering.  NA suffered their first loss of the season, 901 to 938.

For the first time this season, the Tigers were on the verge of defeat.  Whoever would win Game 3, would win the match.  Unlike the first two games, the Tigers came out strong and took an early lead.  As all good weather aficionados know, tornadoes are unpredictable and can form very quickly.  Butler quicky regained their composure and slowly chipped away at the Tigers’ lead.  Each frame they crept closer and closer.

To add more drama, North Allegheny experienced some lane malfunctions and had to wait for assistance.  Butler continued to bowl and reached the 10th frame before the Tigers.  Butler then sat and waited for NA to bowl.  All eyes were on the visiting team, waiting for the Tigers to respond.

It was appropriate that on Butler’s Senior Night, that all three seniors from NA would need to contribute to bring home a Tiger victory.  Senior Joey Lydon provided 5 strikes for the game but probably the most important one was in the 9th frame.  Scheidler then stepped onto the lane – STRIKE.  Cook followed with a strike of his own.  For the second time of the match, the game came down to the last frame.  It took the work of all five varsity bowlers to fend off any last gust of wind as the Tornadoes dissipated and faltered.

The final regular season competition for both the Boys and Girls teams is this Friday, February 5 at Perry Park Lanes.  We will be celebrating our 7 graduating seniors.  The match will be live streamed on the NA Bowling Facebook page.