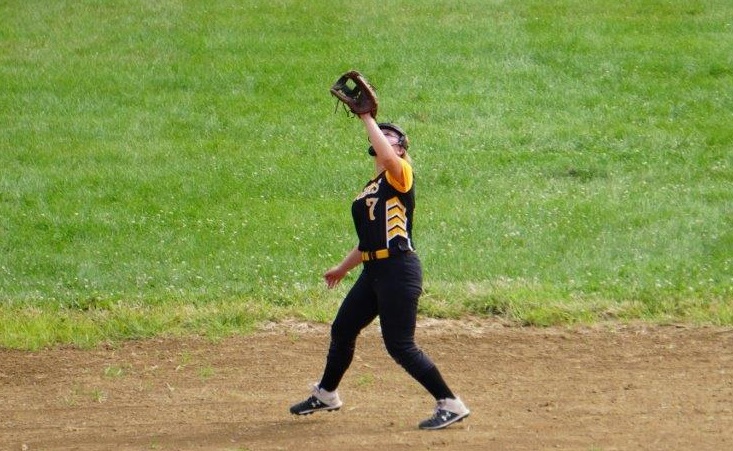 The North Allegheny slow-pitch softball team earned a doubleheader sweep over Baldwin on Sunday with a 19-4 and 13-0 win.

Senior Abby Birch (senior) started the season with a strong triple followed by RBIs from Kenna White (senior), Katie Marangoni (junior), and Madi Klinefelter (junior).  In the bottom of the first inning, the defense was just as strong as the offense with the first out of the season between second baseman, Megan Quinlan (sophomore), and Katie Marangoni, first base. This was quickly followed by a double play from shortstop Lizzie Wetmore (junior) to Marangoni at first.  The Tigers continued to pound Baldwin with hit after hit.  In the third inning, White hit a long fly to deep right center, getting the only home run of the game and earning two more runs.  Over the next few innings, White, Wetmore, and Klinefelter all hit triples; Marangoni, Meg Patterson (junior), and Wetmore each hit doubles.  White lead the team in RBIs in the first game with five runs, followed by Wetmore with four, Marangoni with three, and Birch with two.  Klinefelter, Evie Wiethorn (sophomore), Carly Snyder (junior), Emily Yanchak (sophomore) all earned a single RBI in game one.  Defensively, Snyder, Klinefelter, and Birch all made dramatic fly outs in the outfield, and the infield continued to play tight. As it had started, the game ended with another double play from Wetmore to Marangoni.

Game two continued in the same fashion with the Tigers playing tough defense and offense. Inning one started with three outs in a row by the outfield, two by Snyder and one by Claire Medic (junior).  Offensively, Marangoni hit in two runs with a long fly over the left center fielder’s head. Over the next four innings, Quinlan and White both hit triples, and Patterson, Quinlan, Marangoni, and Wiethorn all hit doubles.  Nikki Crean (sophomore) earned two RBIs and Birch, Wetmore, and Audrey Laswell (sophomore) earned one run.  Ending the game, Snyder, Medic, and Birch caught three fly outs, all on the run.