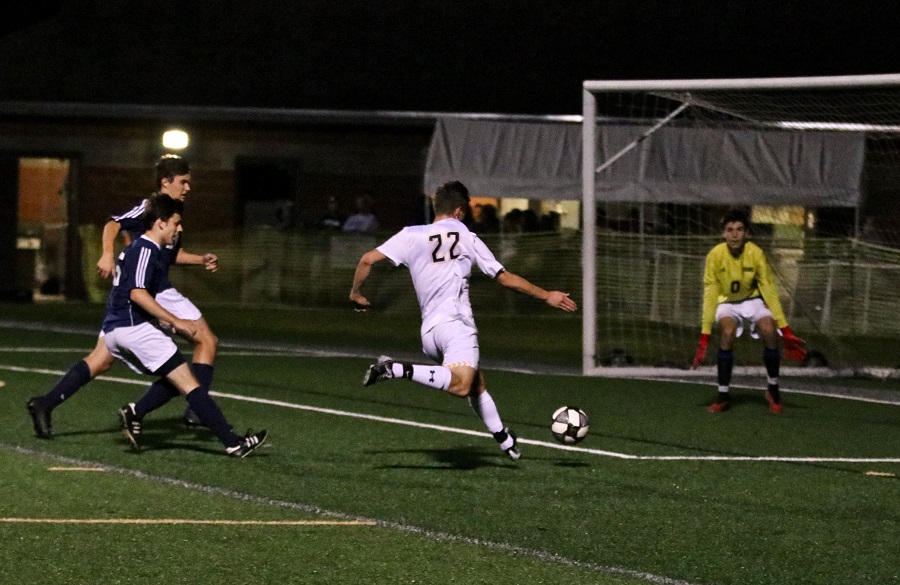 On Tuesday night, the North Allegheny boys’ soccer team visited Shaler High school for only the second road section on the eighth game of the season.  The Tigers rebounded well with a strong defensive effort, posting their first shutout of the year, 3-0.

The first opportunities of the evening came on two consecutive corner kicks, both well placed in the scoring area delivered by senior midfielder J.D. Runatz, however neither were able to be finished.  The Tigers controlled a strong edge of the possession time throughout most of the first period and capitalized with 13:17 remaining in the half. Senior midfielder Bryce Boroughs assisted sophomore forward Evan Anderson, who found the back of the net for the fifth time on the season, putting the Tigers on the board first, 1-0.  Several nice offensive opportunities were generated by senior defender Samuel Giannetti, one delivered senior midfielder Matt Van Kirk and the other to senior midfielder/defender Sam Passodelis, but both were saved by the Shaler goalkeeper.

The second half started with a bang, when at 34:40 remaining, senior forward/midfielder Will Cinker placed a tremendous through-ball to Passodelis for a great scoring situation on the right side. Passodelis capitalized on the opportunity, quickly burying a shot past the goalie, bar-down, right side of the crossbar, putting NA up 2-0.  Five short minutes later, junior midfielder Zoha Peterson lofted a perfect volley finding Van Kirk unguarded in the box, who quickly headed it past the Shaler goalie for the third and final goal in the 3-0 victory.  The Tiger backline of Giannetti, senior centerbacks Jonathan Ross and Jason Roman with junior defender Johnathan Swann played 80 stellar minutes of hard-nosed defense, allowing only 2 shots on senior goalkeeper Jonathan Partridge who aided in delivering the first clean sheet of the season for the Tigers.

The Tigers improved to 5-3 overall and 3-3 in Section 1-AAAA. NA will host section rival Pine Richland on Thursday night at 5:00 p.m at Newman Stadium. The contest will be broadcast live via the internet on the North Allegheny Sports Network.