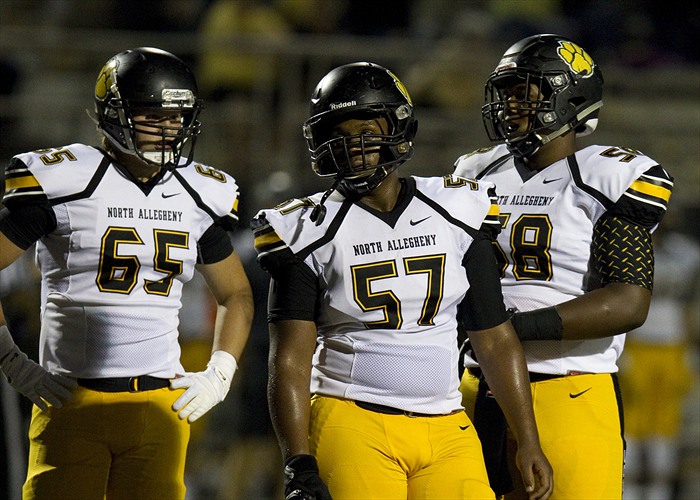 The North Allegheny Tigers (3-1) return to Northern Eight Conference play tonight with a visit to Shaler to face the upstart Titans (1-3). While the Tigers are coming off a 31-6 non-conference pasting of the Upper St. Clair Panthers last week, the Titans recently snapped a 34-game losing streak with a 30-20 victory over Butler last Friday night. The losing streak had been the longest in the WPIAL. The longest current losing streak in the WPIAL now resides with Albert Gallatin who has lost 19 in a row.

Shaler started the season 0-3 but also faced some of the toughest teams in Quad-A with losses to Pine-Richland, Central Catholic and Woodland Hills. Those games might have been just the tonic the Titans needed to propel them to a road win at Butler. Shaler scored on their first play from scrimmage against the Tornado on a 20-yard touchdown pass from Jack Quinn to Killian Bozzo and led for the duration of the game. Quinn is a first-year starter at quarterback for Shaler and has thrown for 485 yards and four touchdowns this season. His top target is Nick Fugh who has reeled in 12 passes for 269 yards and three scores. On the ground, the Titans leading rusher is Jake Hartman with 202 yards and one touchdown.

Shaler is led by second-year head coach Jon LeDonne who has worked hard to change the culture of the Titans football program. Last week’s win will certainly make believers out of his players and they’ll hope to keep that momentum going against the Tigers tonight. Based on previous opponents, Shaler won’t be intimidated by the mere sight of North Allegheny. However, the Shaler defense will be hard pressed to stop the Tigers with a defense that yields 46 points per game.

North Allegheny is once again a well-balanced offense under head coach Art Walker and rolled to a 24-0 halftime lead at Upper St. Clair last week. The Tigers possess a two-headed monster at quarterback with senior Riley Trueman and junior Ethan Maenza. Trueman has accounted for 170 yards of offense and three touchdowns, while Maenza has thrown 409 yards and three touchdowns and has rushed for 430 yards and three scores. Paired up with the running duo of Mike Pope and Nick Provenzano at tailback, North Allegheny boasts a multi-faceted ground game. Pope has rushed for 209 yards and four touchdowns and Provenzano has 210 yards and a 9.1 yards per carry average. In the passing game, Matt Sell is the leading receiver with 14 catches for 260 yards and a touchdown.

The Tigers defense allows an average of 19 points per game and has improved each week. NA’s leading tackler is sophomore Francis Duggan with 49 stops and 4.5 sacks. Sell, Maenza and senior linebacker Mark Alesantrino all have one interception.

Last season, North Allegheny dismantled Shaler in a 55-14 win at home. The Tigers last foray to Shaler earned them a 55-7 victory on October 19, 2012.

Kickoff for tonight’s contest is slated for 7:30 pm. The game will be broadcast live via the internet on the North Allegheny Sports Network with the pregame show hitting the air at 7:10 pm. Randy Gore and Rick Meister will have the call. To listen to tonight’s broadcast, click here.