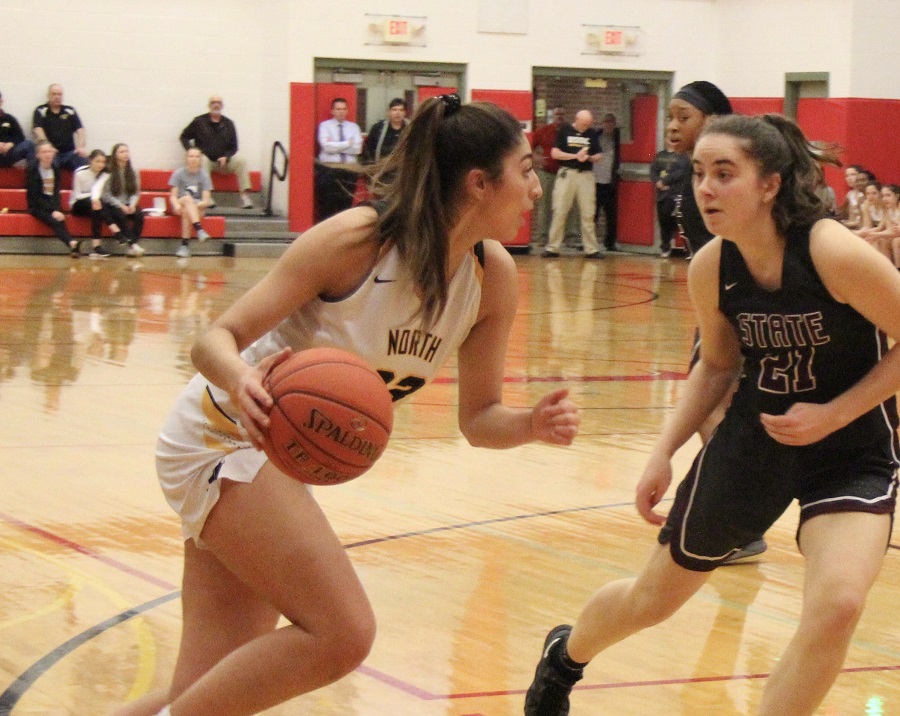 North Allegheny used a big first quarter to pounce on the State College Little Lions en route to a 51-38 win in the second round of the PIAA Class 6A playoffs. With the win, the Tigers have advanced to the PIAA quarterfinals for the sixth time in the last seven seasons. Junior Lizzy Groetsch paced the Tigers with a game-high 15 points in a well-balanced attack.

Tuesday night’s game was a rematch of the season opener from the Wright Automotive Tip-Off Tournament, a contest North Allegheny won handily, 70-20. In similar fashion, the Tigers seized control of the game in the early going with a pressure defense that forced a bevy of turnovers. NA scored the first 14 points of the game and led 14-2 after one quarter of play.

Unlike the previous meeting, State College answered back in the second quarter but still trailed the Tigers, 30-15, at intermission.

NA expanded the lead to as much as 18 points in the third quarter and held a 45-28 advantage early in the fourth quarter before State College put together a rally. The Little Lions used a 10-0 run to trim the Tigers lead to 45-38 with 3:08 left in the game.

Shut down in the first half with just four points, Rice University commit Maya Bokunewicz sparked the Lions’ comeback bid with 10 points in the second half. Senior guard Izzy Leazier chipped in with 12 points and two 3-pointers for the Little Lions.

In desperate need of a basket, Groetsch fed junior forward Paige Morningstar for a critical layup to expand the NA lead to 47-38 with just over two minutes remaining. The Morningstar basket sparked a game-ending 6-0 run to close out a 51-38 win. Groetsch was 4-for-4 at the free-throw line down the stretch and 8-for-8 at the stripe for the game. Providing stellar defense on Bokunewicz for most of the contest, Groetch was selected as the Wright Automotive Player of the Game.

Also contributing to the victory was Morningstar with nine points and freshman Jasmine Timmerson with eight points and two 3-pointers. Sophomore Taylor Rawls contributed seven points and senior Kat Balouris was strong on the glass with numerous rebounds and chipped in with six points.

North Allegheny improves to 24-3 on the season, making it seven consecutive years the Tigers have won 24 games or more in a season. State College concludes their campaign with a 19-7 record.

The Tigers advance to the PIAA quarterfinals and will take on District 11 champion Nazareth on Friday night at a site and time to be determined. The game will be broadcast live via the internet by the North Allegheny Sports Network.